Over 2,000 Syrians Including One General Flee to Turkey 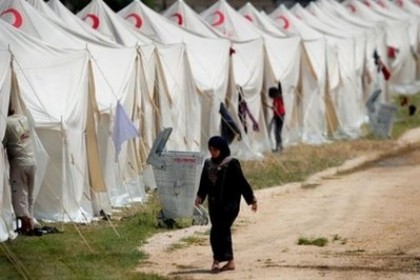 Over 2,000 Syrians, including one defecting general, fled to Turkey on Thursday after a Syrian air strike on the northern rebel bastion of Aazaz in northern Syria, a Turkish diplomat said Friday.

The latest group of 2,204 people brought the number of Syrian refugees in Turkey to more than 62,000, the diplomat told AFP on condition of anonymity.

The last two weeks have seen a dramatic increase in refugee flow to Turkey triggered by fierce clashes between regime forces and rebel fighters for Syria's second biggest city of Aleppo.

The latest exodus of refugees including many injured came after a Syrian airstrike on a heavily populated area of Aazaz, just north of the main battleground city of Aleppo and a few kilometers from the Turkish frontier.

Turkey has been one of the main regional powers denouncing Syrian President Bashar Assad's regime and is being used as a rear base by several rebel groups.

Turkish officials decline to give an exact number of defecting generals in camps, saying that some have been going back across the border to join in the fight against the Assad regime.