Aoun on Security Incidents: Unrest Won’t Spread to Other Areas because our Camp is Containing it 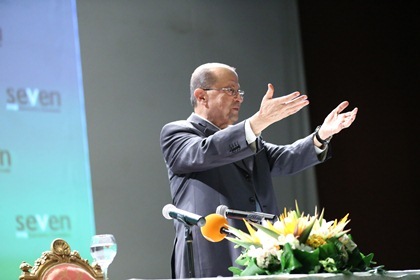 Free Patriotic Movement leader MP Michel Aoun voiced on Friday his objection to the series of kidnappings that have taken place in Lebanon, saying that the causes of the incidents need to be addressed.

He said of the security unrest: “The instability will not spread to other areas because our political camp is containing it.”

He made his remarks during a ceremony in honor of the Seven group that helps fund the FPM.

“The political camp that the FPM belongs to has demonstrated its ability to confront the unrest and end it when the need arises,” continued Aoun.

Clashes broke out on Monday between the rival Tripoli neighborhoods of Bab al-Tabbaneh and Jabal Mohsen over an individual dispute.

The fighting soon escalated, resulting in 13 deaths and at least 95 wounded.

On the kidnappings, the MP noted: “They are the product of certain incidents.”

Several Syrians have been kidnapped in Lebanon in recent days over the kidnapping in Syria of Hassan al-Meqdad.

Al-Meqdad clan’s military wing has claimed responsibility for most of the abductions in Lebanon, as well as the kidnapping of two Turkish nationals.

In May, 11 Lebanese pilgrims were kidnapped in Syria as they were making their way back to Lebanon from a pilgrimage in Iran.

Addressing the flow of Syrian refugees into northern Lebanon, Aoun remarked: “The Lebanese government cannot implement its dissociation policy on the developments in Akkar and Tripoli in light of the great flow of refugees.”

Syrian refugees have flooded Lebanon to escape their country’s crackdown against anti-regime protests that broke out in March 2011.

“Reason tells us to keep out of the problems of others,” added Aoun.

In an indirect reference to Progressive Socialist Party leader MP Walid Jumblat, the FPM chief said: “One must examine the history of every political figure in order to determine his true inclinations.”

While everyone thinks HA is the the problem in lebanon,I disagree, i think they have their values and reasons for being the way they are. They are a product of their experiences and environment and for decades in lebanon they were neglected so the paranoia and actions they have are understandable. On the other hand, Aoun makes no sense, is just comfortable being in attack mode and constantly tries to be an oppositiion, even though he is an active member in the government. I have many sound Aouni friends, until they talk politics. I just dont get their politics, or why they would follow such a hapahazard, spiteful and power grubbing man. he is the biggest problem in Lebanon.

3ammo FT, who cares of there are more Christian MPs if they are worthless and corrupt? I think everyone agrees that the sect isn't a valid enough reason to vote for Aoun's CPL. Frankly, I'd much rather get an additional dozen honest, clean, irreproachable Shia [imagine!] taking our country the 22nd Century with a democratic and economic vision than corrupt Oranginas... even if they are Christians.

Your boss' arguments weigh nothing... it's an empty egg. no substance... hawa hawa.

Obviously Caporal, your camp creates the instability then it contains, you see create then contain those were Bashar's orders. Put that in your pipe and smoke it.

“Whoever frequently changes his stances cannot built a nation,” Aoun
-----
"Hezbollah is not a separate entity from Syria. It is under the Syrian operational control" Aoun

I remind you here that the Syrian regime had said that it came to ‎Lebanon to save its Christians from extermination. I want to ask this regime who, apart from ‎it, in fact wanted to exterminate us?"‎ Aoun

"The resistance has prolonged the time of occupation of South Lebanon"‎ Aoun
"The Shebaa Farms is a big lie; I am fully responsible for what I am saying"‎ Aoun

"We live these days a very delicate situation because if Hezbollah and Syria ‎are serious in their escalation and not merely theoretical, then the possibility of the plight of ‎war is serious"‎ Aoun

I can't believe that some people still believe what is Aoun saying..I think Aoun doesn't even believe his own self...

partition or union?????////another sykes-picot is in the making.

Guys go read tayyar forum's the "satisfied with OTV" discussion, fascinating. One "supporter" unknowingly stumble on the truth, "the grid of OTV seems to be aimed mostly towards a very shallow section of viewers" I guess that's how the army deserter sees his flock, a bunch of shallow brain dead mother flockers who will buy anything he's selling.

@ flamethrower, i would agree with you that in 2009 , there were still people with michel aoun , but now the new electoral law he created with the new governement ensures chiite regions are mixt with christians regions so that he can win . Please try to see further than just to the extent of your nose. I hope you will not put me in the geagea or other march 14th figures camp because im not, the only persons i want to be elected are Sami Gemayel and kataeb people because they are the origins of this country and they are the ones that stood up since the arab nationalist movement till today.

I love this statement : “Whoever frequently changes his stances cannot built a nation,”. Was he talking about himself or referring to others?

Who in their right mind would fund this guy and the all idiots that follow him??? This is leading to nowhere but the destruction of the Lebanon.

These guys better donate their money to the widows & orphans of the Lebanese Army soldiers...

Thirdly, and most importantly, are you now denying Samaha is part of your camp??!! That is hilarious. Raad calls the charges against him as lies, and pathetic deserter Aoun wants to wait until later to condemn him even after video proof.

this is the man who said that the syrian crisis would be ended in march...

“Whoever frequently changes his stances cannot built a nation,” Aoun stated.
And he wants to be President?!
“Reason tells us to keep out of the problems of others,” added Aoun. And he is allied with Hezbollah?!

Aoun indicts himself. His frequent wide changes of positions means that he cannot participate in the building of the Lebanese State. And he lacks all reason by his alliancer with Hezbollah which is up to its banana clips in meddling in the problems of Syria.
Please crazy man, just take your comb over and go away.

Causes and "incidents." Patriotism is measured in action not in words or empty speeches. Deploy the army across Lebanon, seal up the border, collect foreign weapons (initially) to stabilize the country, and draft a defense strategy that declares the state as the sole defender of the country.

@karim_m1,,,,your general is the pillar of corruption,,,stupidity and traitors in the country,,,,,[LONG LIVE LEBANON!!!]that was before your sick general came back from exile,,now the country is dying slowly because of people like you and your masters,,,,go live a life somewhere else.you,re needed here,,,,