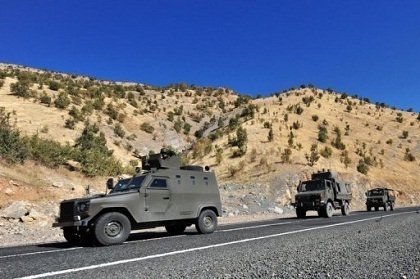 Seven Turkish troops were killed and almost 60 others were wounded Tuesday in a rocket assault on their military convoy in Turkey's southeast, according to local security sources.

The military convoy was hit by Kurdish rebel rockets on the highway on the outskirts of southeastern Bingol province, sparking a fire that wounded 58 soldiers aboard an army bus.

The number of dead soldiers was initially announced at four and the wounded at 48 by the local governor.

Dozens of wounded soldiers are being treated at nearby hospitals and the death toll may still rise, according to the sources.

The Turkish army retaliated with an immediate operation backed by air power in the larger Bingol area to capture the members of the Kurdistan Workers' Party (PKK) who staged the attack, Anatolia news agency reported.

The assailants are identified by witnesses as three men who drove away in a car after the attack, and they are believed to be traveling with heavy explosives on board, NTV private news channel reported.

PKK attacks against Turkish security forces have become almost daily events in the Kurdish-majority southeast, but a powerful rocket ambush carried out in daylight marks a rare incident.

It comes a day after Turkish Prime Minister Recep Tayyip Erdogan said 500 Kurdish rebels were killed over the past month.

Last Sunday, eight police officers were killed in a roadside mine blast in a district of the same Bingol province.

This summer has seen a showdown between Turkish forces and Kurdish rebels, who have ramped up their attacks in recent months, triggering full-fledged military operations in the region.

The PKK, considered a terrorist group by Turkey and much of the international community, took up arms in the southeast in 1984, sparking a conflict that has claimed about 45,000 lives.