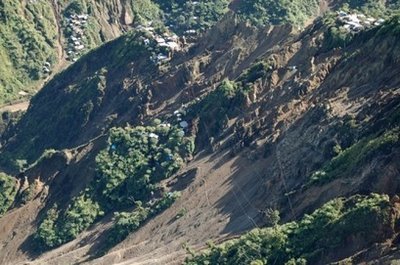 Three people were killed and dozens were missing after a night-time landslide ravaged a small gold mining town in a mountainous area of the Philippines on Friday, authorities said.

The landslide hit at about 3am, ripping through shanty homes while miners and their families were sleeping and destroying poorly constructed tunnels where the unregistered workers extract gold using hand tools, they said.

Three bodies had been recovered by early Friday afternoon while 10 people had been pulled from the debris alive, according to Susan Madrid, duty officer of the region's National Disaster Risk Reduction Management Council.

"But the number of dead will probably go up," she told Agence France Presse.

The spokesman of the military unit that rushed to the site, Lieutenant-Colonel Camilo Ligayo, said residents had told him at least 40 people were missing and feared buried in the tunnels and their homes.

"There are 40 still missing and that is a conservative estimate. The one who gave the estimate was one of the survivors from the tunnels. They know each other there," Ligayo told AFP.

"The landslide is massive and these people, the small scale miners, they work and live on the slopes. They have bunkers, houses, stores."

The landslide occurred in the isolated town of Kinking in a mountainous area of the resource-rich but poor and violence-plagued southern island of Mindanao.

Madrid said there were about 50 houses on the slope before it was hit by the landslide, but she and the military could not say how many people were there at the time.

The local military commander, Colonel Roberto Domines, said an accurate count of the people hit by the landslide was difficult because many people had entered the area unofficially to dig for gold.

"Even the town government cannot give an accurate estimate because these are small scale miners. They aren't from the town. These people come from all over the region," he said.

Madrid said rescue efforts had been hampered because the landslide had blocked road travel to the area -- normally a couple of hours' drive from Mindanao's trading capital, Davao City.

"The route to the area is impassable, but we have heavy equipment that is already clearing the area," she said.

However soldiers and civil defense teams had quickly reached Kinking by helicopter.

The military had also deployed a bulldozer, a dump truck and other heavy-lifting machinery, while a U.S. mining company that had been carrying out exploration work in the region had also sent equipment, Madrid said.

Military spokesman Ligayo said that rain had fallen on Kinking on Thursday, which may have triggered the landslide.

However he said the cause of the disaster was still to be confirmed, with the excavation of the mountains potentially another factor.

Authorities said one person was killed and five others were injured when a landslide hit the same area last month.