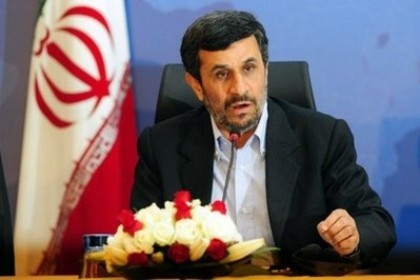 Iranian President Mahmoud Ahmadinejad has urged a ceasefire in Syria and called for internal dialogue to resolve the crisis, but rejects a Turkish proposal to replace President Bashar Assad, Kuwait's press reported Thursday.

"The continuity of the fighting and the killing of innocent and unarmed Syrian citizens ... is unacceptable. A ceasefire must be achieved and then a dialogue started," said Ahmadinejad, cited by the daily Al-Anbaa newspaper.

"The solution must be Syrian made by the Syrian people," he said during a visit this week to Kuwait, where he attended the Asia Cooperation Dialogue Summit.

Ahmadinejad rejected a Turkish proposal made earlier this month that Syrian Vice President Faruq al-Shara replace the embattled Assad during a transition phase in Syria.

"This means we are imposing a foreign solution on the Syrians. The solution must be Syrian and not imposed from outside and the Syrian people should decide through elections," the Iranian leader said.

Ahmadinejad said he had discussed the Syrian crisis with Turkish Prime Minister Recep Tayyip Erdogan during a meeting Tuesday on the sidelines of a regional summit in Azerbaijan.

"Our main goal is to achieve security and stability in Syria," Ahmadinejad said. "But the difference is on the means to achieve that goal."

"Some believe that progress can be achieved through wars but we believe that the means to achieve the goal is through national dialogue."

Ahmadinejad said Iran will respect the choice of the Syrian people, adding that the ground must be prepared for reaching an understanding, "and this is what we told Erdogan and sought his help."

Turkish Foreign Minister Ahmet Davutoglu said Wednesday his country and Iran back calls by the international envoy Lakhdar Brahimi for a ceasefire in Syria to mark an upcoming Muslim holiday.

Davutoglu made the remarks after the Ahmadinejad-Erdogan meeting.

Syria says it is ready to study the idea put forward by Brahimi, who is due to visit Syria on Saturday.

Iran is Syria's closest regional ally and is accused by several Western and Sunni-led Arab nations of providing military aid to Assad's regime.

Turkey backs the Syrian rebels and is currently sheltering more than 100,000 Syrian refugees in several camps along the border.

Yes FT, they had a referendum, ASSAD-Persion Style, results were 99.9 per cent in favour of the TYRANT staying in power & .01 against. I am that STUPID that i believe the results. FT, wake up & smell the coffee!!!

are you stupid or do you just act like it...a referendum in Syria under ASSad?? Do you even know the region to understand how these "referendums" work??

Yes... now Aounis are trying to convince us that Assad is not a dictator!!! lol... like saying that everything in Syria is fine and will be over soon!...or Syria left Lebanon and has no more interests here!...should i go on?

Farsi says wrong.....LOL. His data all collected from the village idiot aka HA preacher. Keep dreaming. Soon your axis of evil will be nothing but a bad dream in history books!

Flame thrower you have to be the biggest idiot i have ever seen online. You really are the biggest moron. You are willing to defend anyone and anything even if they were child rapists for the sake of your political allegiances.

The Persians pushed for killing the protesters in the beginning. Now he wants cease fire and dialog. His side is losing and will be vanquished. Too late for talking. Getting rid of Baath and Bashar is the only solution.

Why ? Let it continue. Assad musn't have breathing time

calling for ceasefire? don t have enough money to finance syria in its massacres? lol

if iran is calling for a cease fire then its clear that the opposite must be done !!

turkey, persians and arabians can not make plans on kurds,today.all of you are racists.