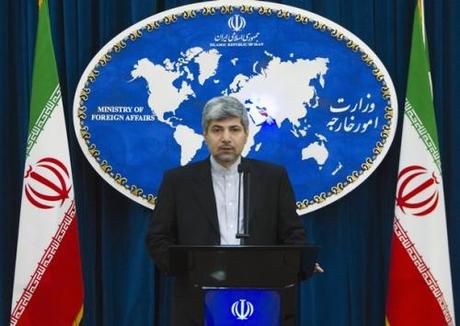 Iran on Saturday condemned a car bombing in Beirut that killed eight people, including a top Lebanese security official, blaming it on arch foe Israel.

Tehran condemned "the terrorist blast which was carried out by those who aim to create division between different Lebanese groups that never serves the interests of Lebanon," spokesman Ramin Mehmanparast said in a statement on the Foreign Ministry website.

"Undoubtedly, the main enemy of the Lebanese people and the region is the Zionist regime which benefits from instability and lack of security in the region," he added.

Foreign Minister Ali Akbar Salehi also condemned the bombing in a telephone call with his Lebanese counterpart Adnan Mansur, according to the website.

"The enemies of the region are seeking to intensify insecurity to achieve their ill-intended aims," he was quoted as saying.

Go and have your usual minute Mot3a you dog.

Wow, what a surprise, Iran blames Israel, and that is supposed to be news.

What a prick. they killed the guy and the Iranians are the only ones to be blamed

March 14, do you believe what these forces of evil and backwardness and Wilayat al-Faqih nonsense are saying? How pathetic it is to blame Israel, the innocent peace-loving and more importantly, life-loving cuddle of fuzz with a long history of charitable work in Lebanon (and elsewhere). After all, they are the enemies of your enemies, the Syrians, who are the real assassins with their friends, the other real assassins known as the 4 innocent generals as well as Emile Lahoud (the most evil of all), Imad Marmal (mkhabba bi tyebo), Suleiman Franjiyeh (underground explosion or else...), Nasser Qandil (baaaaad, very baaaaad), Wiam Wahab (his name is enough), Gebran Bassil (of course) and the biggest of all, General Michel Aoun. Did miss anyone? Oh, I did. Patriarch al-Rai, whose actions and the positions that he takes are, as Dr. Mou7taram rightly said, DISHONORABLE!

Do they ever blame anyone other than Israel or America?

Does this moron have any clue or is he just spewing his usual misinformation? Screw him and his syrian lapdogs.

The main enemy is Syria ya j3ari. Syria not Israel. Syria. We all should go to the streets with a sloga al mowt li bashar. And never leave the streets untill this zbeli is dead.

unfortunately, that's not true, we are surrounded by enemies on all sides... only once Lebanese from all sides and sects realize this, can we prosper and actually stop any bloodshed..
the fact is that M14 never say that Israel is a friend, unfortunately, we cant say the same of M8 in regards to Assad's Syria...

And where can we apply to work for Syria or Iran? Oh yeah our local hezbollah offices! Hakawati you must be one of those blind followers who can't recognize what is right in front of them! How disgusting and shameful of you to not recognize who the real attackers are! Let me guess? You are the person who even though there is conclusive evidence of Syria and Hezbkhara being the attackers, will not believe it because you are all so faithful to your loyal clan, who will adamantly deny any wrongdoing and put the blame on israel and america...everything is a conspiracy to them..the war in syria, Rafiq's assassination,along with all of the other assassinations that occurred and now this one. I hope that people like you some day wake up! I would rather live like an American/Israeli than a Syrian or Iranian that is provided with no future and no freedom!

at least israel isnt the one killing people,and in case israel is the 1,i hope she can find ur dog in his hideout 1 day and rape the shit out of him.same goes for aoun and for all the idiots who doesnt care about lebanon and are loyal to someone else.enough of m8 leaders trying to make fun of us and act like we're idiots,coz we're not.be loyal to lebanon or go the fuck away.i dont care about m8 or m14,i hope they all fuck off,but god man march 8 are really retards and think lebanese are their cattle.dont provoke israel,be loyal to lebanon or fuck off already.

Any new revolution in Iran next year during and after election should be assisted by Hariri and Co...the only way we can rest once and for all is when Ayatollah's Iran is buried...

go labbe nassrallah in Syria and do your jihad duty

Come on you guys Stop Blaming Syria and Hezballah...These 2 will ever do anything of the sort...Who are you kidding?

If I was to have a stab at who the killers are I would say that my 80 year old aunt and her boyfriend are the prime suspects here...

what is sad is how an entire Lebanese sect (shia) is being hijacked by HA and the syrian cronies, and you dont see any uprising.

so nice from israel then... every time someone is against syria then israel does the job for them! waw! didn t know they were so close allies!

super logic at its best!

@galiboun
what a few priests do is not a reflection of their religion... unfotunatley, can say the same of yours..
Go Labbe Nasrallah and do your Jihad duty in Syria..dont go alone, take your friends with you and make a road trip of it..

If my priest does any perverted act its out of evil not the Bible, Mot3a is in your doctrine, dickhead.

Thank you ya galiboun for being so polite and thoughtful...

I am really not sure who you are referring to as "my own people"!!!

What a low life loser. Obviously, there is nothing in his country Iran to do or talk about. I think he forgot to replace the word "condemns" with "orders" Lebanon bombing. This guy makes me sick. Please leave our Lebanon alone and try sort out the shit in your country. You criminal backwards literate thug.

Unlike you... we're nobody's dog. A concept You or the likes of you could never understand hakawati...

@Galiboun...lets not talk about religion coz there is a lot i can say about yours. starting from who likes young ones! w fihmak kfeye

Did jayjay take your precious advice? By the way, where did you get this cutest picture of my hairy butt, you nasty thief you? You may continue to use it, though. Your friend slash also uses another shot of my hairy butt! Soon, my hairy butt will make it into the Guinness Book of Records! Thank you, fans.

Why does every comment here have to be about someone elses religion?
How does the world expect Lebanon to exist as a "normal" nation when Shia attacks Sunni attacks Alawi, never mind people who aren't Moslem.

Shut the hell up and go hide in Mullah holes you theocrats!!