Free Syrian Army Says to Cease Fire if Govt. Does So First 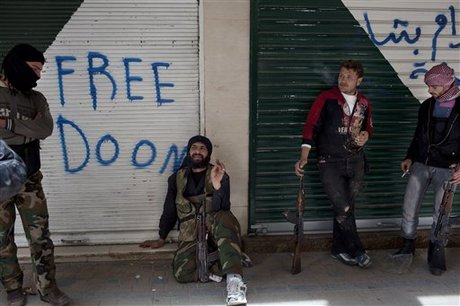 However, he said the "regime has lied many times before. It is impossible that the regime will implement the truce, even if it says it will."

Brahimi has proposed a truce for the four-day Eid, which starts on Friday.

Syria's foreign ministry said it would make a final decision on the truce on Thursday, although Brahimi said earlier Damascus has accepted the proposal.

Meanwhile, a spokesman for the FSA's Mustafa Brigade in the Eastern Ghouta area of Damascus province expressed skepticism.

"What truce is possible when there are non-stop massacres and the martyrs are dying in the hundreds?" he told AFP via Skype.

"Amid the unrelenting aerial bombardment, which truce do you think will be applied?"

The FSA is an umbrella term for scores of rebel groups that have joined the 19-month uprising against the regime of President Bashar Assad.