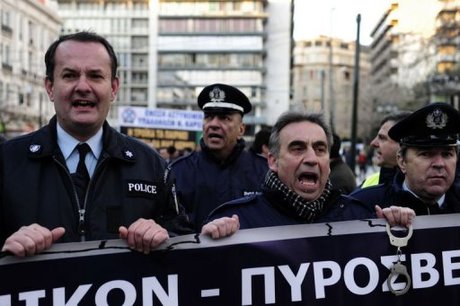 The rights group said people rallying against government spending cuts, tax rises and job losses in countries hit by the eurozone crisis and elsewhere had sometimes been seriously injured by police or had had medical treatment withheld.

"People demonstrating peacefully in EU countries have been beaten, kicked, shot at and wounded with rubber bullets and sprayed with tear gas," Amnesty said.

"Yet excessive use of force by police goes uninvestigated and unpunished."

Greek journalist Manolis Kypreos was left completely deaf in June 2011 after police threw a stun grenade at him, the report added.

Kypreos has since recovered some hearing but his disability has effectively ended his career, Amnesty said.

"Governments must spell out and reiterate that police officers may use force only when strictly necessary," said Fotis Filippou, Amnesty's campaign coordinator for Europe and Central Asia.

"They must introduce strict guidelines on the use of potentially lethal riot-control devices such as pepper spray and tear gas, water cannon and rubber bullets."

The report warned that excessive force and arbitrary arrests of protesters could turn anger against governments into anger against the police, increasing the risk of violence at anti-austerity demonstrations.

Under international law, police can only use force when it is required for them to perform their duty and they must be restrained in its use, Amnesty said.

Police forces in several European countries have faced budget cuts themselves as governments seek to shrink their huge deficits, the report added.