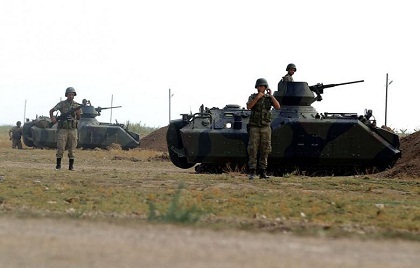 Turkish artillery struck back on Monday after a shell fired from neighboring Syria ploughed into Turkish territory without causing any casualties, the state-run news agency reported.

The shell struck near the village of Besaslan in southern Hatay province amid escalating clashes between Syrian loyalist troops and rebels in the Syrian town of Haram, just across the border, Anatolia said.

Turkey has systematically retaliated to every cross-border shelling since Syrian fire killed five Turks on October 3.

One-time allies Turkey and Syria fell out after Ankara joined Arab and Western countries in urging Syrian President Bashar Assad to halt his violent crackdown on the popular uprising that erupted in March last year and has now turned into a civil war.

Turkey supported a proposal by international peace envoy Lakhdar Brahimi for the regime and the rebels top lay down their arms during the Eid Al-Adha Muslim holiday but the truce never took hold.