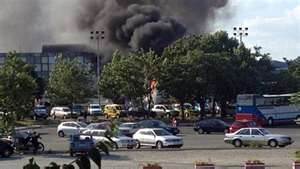 Interpol said Friday it will make a new push to help Bulgaria identify the bomber who killed six people, including five Israeli tourists, at Burgas airport in July.

"Interpol plans on re-issuing the image (of the suspect), reminding people, asking people, hoping that maybe we will catch someone who is watching TV or on the Internet, who recognizes the person and can help give leads to identifying him and locating him," said the chief of the global policing body, Ronald Noble.

The new search will "increase tremendously the likelihood of identifying and locating the person responsible," he added after talks with Bulgarian Interior Minister Tsvetan Tsvetanov and Prime Minister Boyko Borisov.

Interpol already circulated a computer-generated picture four months ago of the July 18 bomber, who also died in the bombing but investigators are uncertain whether he intended to blow himself up.

It has also tried to match fingerprints and DNA samples from his remains with anything in international databases, but to no avail so far.

Still, Noble remained optimistic that investigators might get a break.

"Interpol has examples of many, many cases where DNA was sent to us, fingerprints were sent to us, the first response was negative and then a week later, a month later, a year later it was sent to us again and there was a hit," he said.

Interpol experts will also arrive in Bulgaria in the next two weeks to work on a new system enabling hotels, car rental offices and other tourist services to scan foreigners' passports against Interpol databases in a bid to root out fake identities.

Israel immediately blamed Iran and Hizbullah after the attack at Burgas, in which five Israeli tourists and their Bulgarian bus driver were killed, but Tehran denied any involvement.

Bulgaria has refused to point a finger at any person or organization before garnering enough evidence from the investigation.

Burgas is most probably an Israeli false flag that went wrong. Israel has been using MeK and Jundalla operatives because of their Iranian identities.

The US and Israel trained MeK and Jundalla were used in the assassinations of Iranian scientists working on the nuclear program. There training fits the profile of Burgas.

This same profile appeared in bombings in Mumbai, Bangkok, Tblisi and Burgas all happening around the same time earlier this year. DNA matches would be hard to come by for operatives of the MeK or Jundalla.

All these bombings remain unsolved but both India and Thailand seem very upset with Israel. India has its own terrorist problems and Thailand prides itself in the safety of its tourists.

hizbala acted in Bulgaria...and while at it, brought some of the bulgarian-made explosives, to be used in Achrafieh blast, last oct 19th...what a coincidence that mikati went there...

mmckinl is right.
I am argentinian and an independant investigator of the two similar bombings in Buenos Aires: in 1992(israeli embassy) y 1994 (AMIA building).
Both attacks remain also unsolved and in both of then israel and US INSTANTANEOUSLY and without show any proof blamed to Iran/Hezbollah(their enemies).
In Argentina, with the evidence known up to now is imposible that Iran or Hezbollah have done those attacks.
So, it must be Israel and/or US those perpetrators.