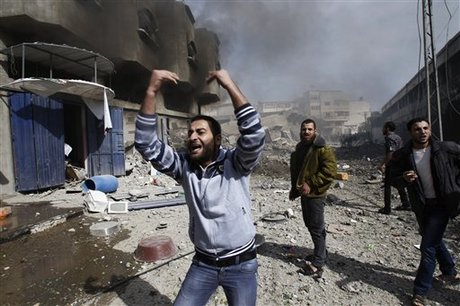 An Israeli official landed in Cairo on Sunday for Egypt-mediated truce talks with Hamas to end the Gaza conflict, Egyptian security officials said.

The official landed in a small plane at 1100 GMT and was quickly escorted away by intelligence personnel, the security officials said.

At least 56 Palestinians and three Israelis have been killed over the past five days around Gaza.

With international opinion veering away from an escalation, U.S. President Barack Obama said on Sunday it was "preferable" for the Gaza crisis to end without a "ramping up" of Israeli military activity.

"Israel has every right to expect that it does not have missiles fired into its territory," Obama said in Thailand. "If that can be accomplished without a ramping up of military activity in Gaza, that is preferable."

In Cairo, senior Hamas officials said Egyptian-mediated talks with Israel to end the conflict were "positive" but now focused on the possible stumbling block of guaranteeing the terms of a truce.

An outcome acceptable to Hamas would be assurances by the United States, Israel's main backer, to be the "guaranteeing party," one official said on condition of anonymity.

"There are efforts to that end," he told Agence France Presse. "If that is not the case, I don't think there's anyone who wants to gamble with his political reputation."

Hamas, now in the fifth day of a conflict with Israel around Gaza, wants guarantees that "the aggression and assassinations would stop," said another senior official.

The Islamist movement also demands that the siege Israel imposed on Gaza in 2007 after Hamas seized the territory be lifted -- an unfulfilled condition when Hamas agreed a truce in January 2009 to end the last major conflict there.

The first official said the parties in the talks realized time was of the essence, as Israel mustered troops and armor outside Gaza amid threats that the air and naval bombardment would give way to a ground invasion.

"Extended talks could lead to a development on the ground that would foil all efforts," he said.

In January 2009, Egypt helped mediate an end to a three-week war in Gaza with a truce that Hamas said would require Israel to lift its blockade.

Israel too had demanded Egyptian commitments to stop smugglers from sending weapons into Gaza, but arms continued to find their way into the enclave, according to Israel.

Hamas and Egyptian officials have accused Israel of violating a recent tacit ceasefire to end tit-for-tat air strikes and rocket fire when it assassinated Hamas' military chief in Gaza on Wednesday, sparking the latest conflict.

Meanwhile on Sunday, Israel's Foreign Minister Avigdor Lieberman insisted that "the first and absolute condition for a truce is stopping all fire from Gaza," and that all armed groups would have to commit to it.

Earlier, Prime Minister Benjamin Netanyahu warned that Israel was ready to "significantly expand" its operation against Gaza militants even as he prepared to receive French Foreign Minister Laurent Fabius, who is on a whirlwind truce mission to the region.

Why does Hamas think that it is in a position to make demands? Maybe they should concentrate on not firing random missiles into a country that not only can flatten it, but also can live with it because they are used to being hated.

The problem with you, if you would bother watching television stations other than Al Mannar is that you would see that Israel is keeping calm, otherwise there would have been a lot more casualties in Gaza.

Bet yur tv is stuck on cnn or fox news...jeeeeez bro, they stereotyped yur brain, change before its 2 late!!!