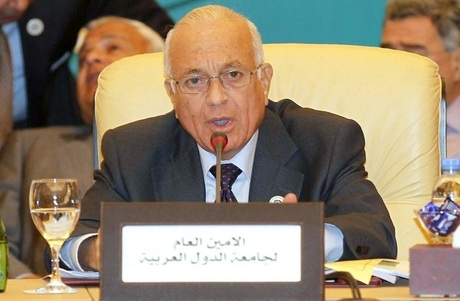 Arab League chief Nabil al-Arabi hoped on Sunday that the United States and Russia could reconcile their views over Syria in order to facilitate a settlement of the crisis in the war-ravaged country.

"Talks between the United States and Russia along with the international envoy (Lakhdar Brahimi) continued in Geneva today," Arabi told a meeting of the Arab ministerial committee on Syria held in Doha.

Clinton said there had been no "great breakthrough" during those talks, but said there would be further meetings between officials.

Arabi said the aim of the U.S.-Russian talks was to "prepare a resolution for the (U.N.) Security Council" over the Syrian crisis.

"This resolution will send a clear message to the (Damascus) regime that it is no longer protected."

Russia, along with China, is one of the last supporters of Syrian President Bashar Assad and has routinely blocked draft Security Council resolutions condemning his rule.

In a statement after their meeting, the ministerial committee reiterated a call for Assad to "step down to facilitate the start of a transition of power and end the bloodshed and destruction" in Syria.

The ministers also appealed for humanitarian aid for internally displaced Syrians and refugees, and asked the League secretary general to "prepare a conference on the reconstruction of Syria," post-Assad.

Earlier, Qatari Prime Minister Sheikh Hamad bin Jassem al-Thani described as "unacceptable" the inaction of the Security Council over Syria, where more than 42,000 people have been killed in violence since March 2011, watchdogs say.

"We hope that the ongoing meetings between the United States and Russia will lead to a common approach... for the Security Council to assume its responsibilities" on the Syrian crisis, he said.

At a news conference after the meeting, Sheikh Hamad said the downfall of Assad's regime "is imminent."

But in response to a question, he also indicated that the Syrian regime could resort to chemical weapons -- a fear also openly expressed in the West.

"I do not exclude their using all kinds of weapons -- given they manner in which they are massacring their own people, they are capable of anything," he said.

who braught the subject of chemical weapons into the discussion , the answer is US. The same govermant and its intelligence who beleived saddam had WMD in his arsenal
wake up you naive people and see whats happening around you