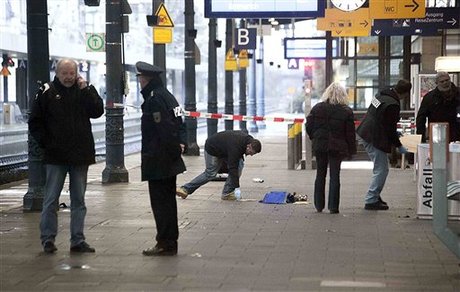 German prosecutors said on Friday they believed Islamist extremists were behind a botched bomb attack at Bonn train station.

The federal prosecutor said in a statement that there was enough evidence to suggest Monday's incident was "an attempted explosives' attack by a terrorist organization with a radical Islamist bent".

The prosecutor's office, which is responsible for probing matters of terrorism, has taken over the investigation, it said.

A blue sports bag was discovered on Monday on a train platform at the station in western Germany containing an improvised explosive device.

"Why the explosive device did not detonate, requires further investigation," the prosecutor's statement said.

But it added that there was serious evidence "that the suspicious person has connections in radical Islamist circles", but gave no details.

Its discovery sparked the complete evacuation of Bonn station.

Norbert Wagner, who headed the investigation for Cologne police, told reporters on Wednesday that had the gas exploded and caused the ammonium nitrate to ignite, "there would have been a significant explosion ... that of course would have caused considerable harm to people."

On Tuesday, police arrested two men, one with links to an extremist Salafist group, but released them, and a day later announced they were looking for two men in connection with the incident.

killers are killers no matter how who and where. May God punish every killer in this world by giving their conscious a jab that would cause more mental pain than any human can handle.