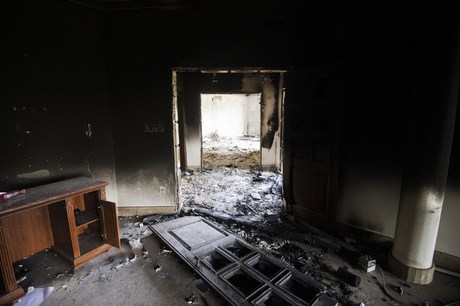 A keenly-awaited inquiry into a deadly militant attack on a U.S. mission in Libya has been completed and U.S. Secretary of State Hillary Clinton is reviewing it, a top official said Monday.

The findings of the Accountability Review Board set up by Clinton just days after the September 11 attack on the U.S. consulate in Benghazi could unleash a Christmas bombshell for the U.S. administration.

Four Americans, including the ambassador Chris Stevens, died in the assault by dozens of heavily-armed militants, who overran the consulate before unleashing a hail of mortar fire on a nearby annex being used as a safe house.

Republicans have excoriated the administration for failing to provide proper security, and for allegedly trying to cover-up the attackers' ties to al-Qaida.

"The ARB has completed its work. Its report has gone to the secretary this morning," State Department spokeswoman Victoria Nuland said, adding there was an unclassified part, and a separate classified section which would not be released to the public.

U.S. lawmakers hoping for answers from the top U.S. diplomat about the events in Benghazi will be frustrated, however, that Clinton was forced to cancel plans to testify to House and Senate committees on Thursday because of ill-health.

"The secretary had anticipated testifying," Nuland stressed, but added "she is still under the weather. She was diagnosed as having suffered a concussion after fainting and falling, and her doctors have urged her to stay home this week."

Clinton had sent a letter to the committee chairmen Monday to say "thank you for your understanding, and that I wish I could have been there myself," Nuland said, adding she would work with them going forward "on these very important issues."

And deputy secretaries of state Bill Burns and Tom Nides will then appear on Thursday in Clinton's place at the House Foreign Affairs Committee and the Senate Foreign Relations Committee.

Clinton may now appear before U.S. lawmakers in January, before she steps down after four years in office, Nuland said.

"She's making clear in her communication with the committee that she expects that they're going to have to have ongoing conversation in January, and she's available for that," Nuland told journalists.

Representative Ileana Ros-Lehtinen, who chairs the House Foreign Affairs Committee, said it was "unfortunate" Clinton would not testify as planned.

Lawmakers still have "tough questions about State Department threat assessments and decision-making on Benghazi. This requires a public appearance by the secretary of state herself," she said in an earlier statement.

Three months after the attack, many questions about the events of that night remain unanswered, and the attack became a political football in the bitter run-up to the November presidential elections.

It is unclear why Stevens traveled to Benghazi from the better-protected embassy in Tripoli on the anniversary of the September 11, 2001 attacks on the United States -- a day when security is ramped up in diplomatic outposts around the world.

Stevens is believed to have died, along with information manager Sean Smith, when they were overcome by smoke after the militants set fire to much of the compound. But no autopsy has been released.

Exactly who was behind the attacks has also yet to be made public, although the administration has fingered militants with links to Al-Qaida in the Islamic Maghreb (AQIM) and vowed it will bring the killers to justice.

The fierce firefight lasted from 9:40 pm local time until about 4:00 am, during which the consulate staff were evacuated to the safe house, which also then took mortar fire. Two former CIA agents were killed there.

Clinton fell ill after contracting a severe stomach virus on her return from a European trip earlier this month. She suffered "extreme dehydration, and subsequently fainted," her doctors said, adding they had recommended she continued to rest this week.