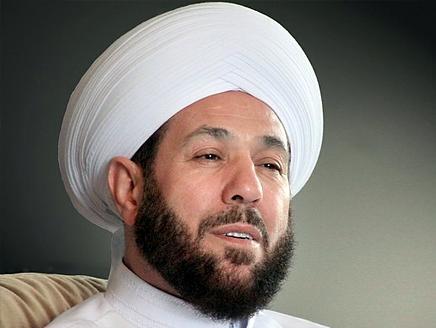 Syria's top Islamic authority appealed to the opposition to seek "regime change through dialogue, not by force," the SANA state news agency said on Wednesday.

"Members of the foreign-based opposition will ultimately be forced to sit at the negotiating table," Grand Mufti Sheikh Ahmed Hassun Badreddin was quoted as saying.

The Sunni Muslim cleric called on the opposition to "take the initiative," and urged armed insurgents "to throw down their weapons. Regime change does not come by force, but through dialogue," SANA quoted him as saying.

Hassun is close to the regime of President Bashar Assad, who belongs to the Alawite community, an offshoot of Shiite Islam.

His comments were published two days after a pro-Damascus Lebanese newspaper ran an interview with Vice President Faruq al-Sharaa saying that he favors a negotiated solution to Syria's 21-month conflict.

"No opposition can end the battle militarily, just as the security forces and army cannot achieve a decisive conclusion," said Sharaa, calling for a "historic settlement" between the warring parties and backed by key regional countries and U.N. Security Council member states.

How is he a traitor? Because he is condemning a method that hasn't worked? When will your violent mind understand that resistance through violence accomplishes nothing, just ask the 40,000 Syrians that are dead at the hands of the regime and the opposition.

But it is naive, uneducated individuals like you that are responsible for such violent acts across the world.

gcb you know nothing about Hassun so before you start acting like you're all wise and knowledgeable go do some research about this wannabe sheikh. We know him, his father and his entire family tree, he's nothing but a rent a sheikh who lives in one of the poshest areas in Damascus and lives off of Bashar's blood money.

Am I praising him? No, I do agree however with his idea of dialogue being the only way out of the current mess. So spare me your accusations that I am trying to "act all wise". If that is how I came across, then that could only be a good thing.