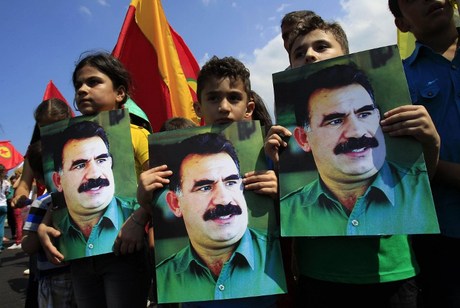 Turkey's intelligence agency has discussed the issue of disarmament with the jailed Kurdish leader in a bid to bring an end to the nearly three-decade old insurgency, a newspaper reported on Monday.

Officials from the National Intelligence Organization (MIT) held a four-hour meeting with Abdullah Ocalan on December 23 to urge outlawed Kurdistan Workers' Party (PKK) militants to lay down their arms, the Hurriyet newspaper reported.

But Ocalan demanded that he must have a direct contact with the PKK and his detention conditions must be improved, according to the paper.

Turkish Prime Minister Recep Tayyip Erdogan said in a televised interview Friday that his agents were meeting with Ocalan, who is being held in solitary confinement on a remote island prison off Istanbul.

"I cannot hold such meetings myself as a politician but the state has agents ... and they do (hold talks)," Erdogan told the state-run TRT television.

"The meetings on the island are still under way because we must get a result. If we see a light (for a result), we continue to take steps," he said, referring to the meetings with Ocalan.

Ankara initiated clandestine talks with the prominent figures of the rebel group in 2009 to negotiate peace, but the talks failed.

The deadlock further increased the bloodshed in Turkey, where some 45,000 people, most of them Kurds, have been killed in the conflict.

Ocalan was charged with treason and sentenced to hang in 1999 but the sentence was commuted to life in prison in 2002 after Ankara abolished the death penalty.

The fresh talks with Ocalan aim at laying down a timetable under which a declaration on ending the insurgency will be issued in the first months of 2013 and the PKK will start disarming, Hurriyet reported.

Turkey had also talked with Ocalan to end a hunger strike of Kurdish prisoners in November.

The prisoners were demanding a lifting of the ban on the use of the Kurdish language in courtrooms, as well as better conditions for Ocalan.

Ocalan is allowed to have visits from his family, which relays his messages to the public, but his lawyers have been denied visits for almost two years, as Ankara accuses them of carrying messages to Kurdish rebel top brass.

After a decade behind bars, Ocalan is still a respected figure for a majority of Turkey's Kurds, although his influence in the hawkish wings of the PKK is believed to have diminished.