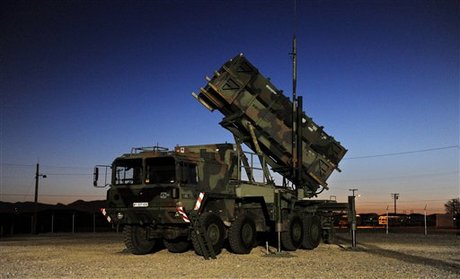 U.S. troops began arriving in Turkey on Friday to man Patriot missile batteries against threats from neighboring Syria, where the 21-month conflict between the regime and rebels has escalated.

Syrian air and ground forces were pounding insurgents dug in outside Damascus in a ferocious offensive being waged a day after a car bomb in the north of the capital killed at least 11 people, according to the Britain-based Syrian Observatory for Human Rights.

The arrival of the U.S. personnel specialized in the six Patriot systems to be deployed on the Turkey-Syria border in the coming weeks under a NATO agreement highlighted fears that Syria's civil war could suck in other nations in the region.

Cross-border fire has already erupted on several occasions in recent months from combatants in Syria into Turkey, Lebanon and the Israeli-occupied Golan Heights.

The United States last month also expressed concerns that there were signs Syrian President Bashar Assad could be preparing to use chemical agents in missiles or aerial bombs as a last-ditch measure against the insurgents.

The U.S. military's European Command (EUCOM) said on Friday that the troops being sent to Turkey's Incirlik air base would swell to 400 within days to support the two U.S. Patriot batteries being supplied by America.

Germany and the Netherlands will supply the four other Patriot batteries under the NATO agreement struck at Turkey's request and described as a purely defensive deployment.

"The forces will augment Turkey’s air defense capabilities and contribute to the de-escalation of the crisis along the Alliance's border," the EUCOM said.

Syria's chief ally Iran, however, has called the Patriot deployment "provocative," seeing it as a blunting of its own offensive capabilities.

Ankara has responded by telling Tehran to use its clout with Assad to resolve the civil war in his country.

That conflict has worsened in the past six months as Assad has ordered warplanes and heavy artillery to blast the rebels, who hold great swathes of Syria's countryside, especially in the north.

The United Nations this week said 60,000 people have died since the rebellion began in March 2011. Its figures showed average daily fatalities have multiplied since mid-2012, correlating with the increased use of regime air power.

On Wednesday this week, at least a dozen people were killed in an air strike on a petrol station in the town of Mleha, just east of Damascus, according to the Observatory.

On Friday, fighter-bombers were hitting Duma, northeast of Damascus, and artillery was shelling the southwestern Daraya neighborhood which the rebels have held against regime assaults for weeks, it said.

Troop reinforcements were being sent to Daraya, the British-based group added.

The offensive was being waged a day after a car bomb in the north Damascus neighborhood of Massaken Barzeh, mostly inhabited by members of Assad's Alawite minority, killed at least 11 people, the Observatory said.

Two children were among the dead, it said.

They were among at least 191 people who were killed on Thursday, including 99 civilians, the Observatory said, adding that fighting in Damascus and its outskirts accounted for 87 of those deaths.

Nationwide on Friday at least 27 people died -- 16 civilians and 11 rebels -- according to preliminary Observatory figures.

Meanwhile, Syria has slammed as "biased" a U.N. report released on December 20 that called the conflict in the country "overtly sectarian in nature."

The foreign ministry accused the U.N. of a "lack of professionalism" in producing its report, and said that any sectarian dimensions to the conflict were because of foreign support for "armed groups," state news agency SANA said.

The joke of the season: The USA is employing her missiles and soldiers on Turkey's Syria's borders to protect Turkey from a Syrian attack. Or is it a preparation for Turkey's occupation to northern Syria which she always sought, especially Aleppo, The Turkish Ambassador in Lebanon told me this openly some years ago. The so called "Arabs" lost Palestine and now northern Syria.