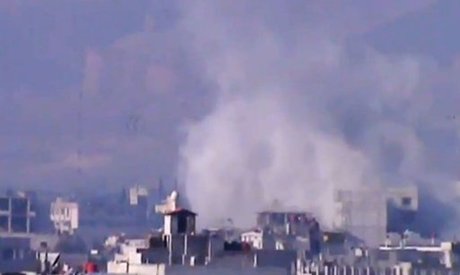 A shell hit a Christian area of Damascus and a car bomb exploded elsewhere in the Syrian capital on Saturday, a watchdog said, as clashes raged around an airport in the north of the country that rebels have sought to capture.

"A shell was fired on Bab Tuma," a Christian quarter of Damascus's old city, said the Syrian Observatory for Human rights, without specifying exactly where it landed or where it was fired from.

Bab Tuma was targeted for the first time in the 21-month conflict by a car bomb in October that killed at least 13 people, but has been spared the violent clashes that have torn apart the rest of the country.

Early on Saturday, a car bomb blast rocked the Rokn Eddin neighborhood in the north of the capital, the Observatory said, but gave no further details.

In the north of the country, President Bashar Assad's army bombarded rebels positions in Aleppo province and clashes broke out between insurgents and troops in the areas around Aleppo international airport, the Observatory said.

Rebels have launched numerous assaults over the past few days to try to take the strategic airport of Syria's hard fought-over second city.

The airport was closed for two days from Tuesday after repeated insurgent attacks, and had to shut again on Friday due to "thick fog," the authorities said.

It would reopen later on Saturday, an airport official told AFP, saying the army had successfully repelled the attacks and driven off the rebels.

The Britain-based Observatory, which relies on a network of activists and medics on the ground for its information, said 50 people were killed in fighting across the country on Saturday, according to preliminary figures.

It gave a death toll of 130 for Friday, in a conflict which started out as a peaceful uprising in March 2011 and which the U.N. says has killed 60,000 people since it turned violent early on.

tell the towelheads to keep their shells in their own sharia zones. this goes for both assad and the mujahideen.