UNHCR: 1,400 Fled to Lebanon to Escape Syrian Unrest in Week 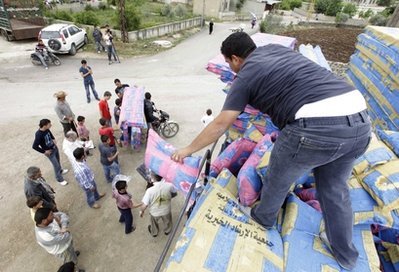 Some 1,400 Syrians, many of them women and children without belongings, crossed the border with Lebanon last week to join many more who have fled the unrest at home, the U.N. refugee agency said Friday.

"Most of the people who have crossed the border in recent weeks are women and children. In addition to their immediate need for food, shelter and medical help, they also need psycho-social support," UNHCR spokesman Andrej Mahecic told reporters in Geneva.

According to local Lebanese leaders some 1,400 people have crossed into the Wadi Khaled and Tall Biri regions over the past week from the Syrian border town of Tall Kalakh, he said

"Local authorities estimate that around 4,000 Syrians have crossed to Lebanon recently. The exact numbers are difficult to confirm," the spokesman added.

Pro-democracy protests erupted in several Syrian towns and villages on Friday, with demonstrators calling for more freedom in defiance of a brutal crackdown.

Friday's protests were called amid mounting pressure by the international community for the Syrian government to stop its crackdown on demonstrators, emboldened by revolutions in Tunisia and Egypt.

"Many of those who have crossed the border recently have come without any belongings; having fled what they say was heavy military bombardment of Tall Kalakh and surrounding areas," Mahecic said.

"Most have found shelter with relatives or host families, and some are residing temporarily in a school in Tall Biri," he added.

The border town of Tall Kalakh has for days been surrounded by the Syrian army, provoking the mass departures of Syrians, notably to Lebanon.