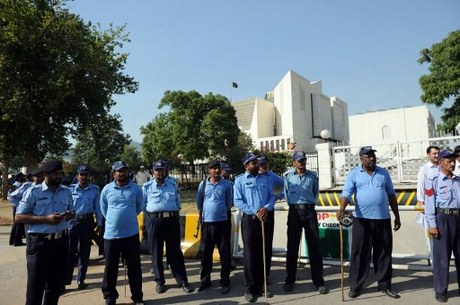 At least 12 Pakistani security personnel have been killed in clashes and a landmine explosion in the two regions of the country most troubled by insurgents, officials said Tuesday.

The fighting broke out in the northwestern Khyber district, where troops are frequently locked in clashes with homegrown Islamist militia Lashkar-e-Islam.

Taliban and al-Qaida-linked militants have carved out strongholds in the semi-autonomous tribal belt to plot attacks on Pakistani, Afghan and Western targets.

"Around 100 militants attacked a Frontier Corps checkpost in the Shalobar area of Bara in Khyber tribal region on Monday night, which triggered a firefight," a security official told AFP on condition of anonymity.

Officials said four paramilitary soldiers and two tribal policemen were killed, and 16 other personnel were wounded.

The area is cut off to journalists and aid workers so it was not possible to confirm the death toll independently.

A spokesman for Lashkar-e-Islam said it carried out the attack but denied that any of its fighters were killed.

"We took four soldiers hostage as well. There was no loss of life on our side in the clashes," said spokesman Abur Rasheed Lashkari in a text message.

In the southwestern province of Baluchistan, six policemen were killed when their vehicle ran over a landmine around 460 kilometers (300 miles) southwest of Quetta.

"A senior police official of intelligence branch and five of his subordinates were on a mission in Panjgur district when their vehicle collided with a landmine. All of them were killed," Balach Aziz, a senior administration official, told AFP.

Twin suicide attacks killed 92 people at a snooker hall in a mainly Shiite Muslim area of Quetta last Thursday, the deadliest single sectarian attack on the minority community in Pakistan.