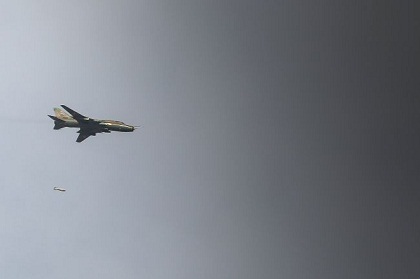 Syrian warplanes on Monday launched raids on two towns east of Damascus, a monitoring group said, as a total overnight electricity blackout in the capital began to lift in the morning.

"Warplanes staged several air strikes on Irbin and Hamuriyeh in Damascus province," said the Syrian Observatory for Human Rights, which relies on a network of activists, doctors and lawyers across the strife-torn country to compile its reports.

The Observatory said that early on Monday the army shelled and deployed new reinforcements to the rebel-held town of Daraya, as part of its bid to quell the insurgency in the outskirts of Damascus once and for all.

The Britain-based watchdog said that violence was reported also on Sunday night when helicopters strafed the town of Tabaqa in Raqa province, in northern Syria, killing eight civilians.

Among the victims were three children aged five, six and eight years old.

Monday's violence came a day after at least 127 people were killed in violence across Syria, including 49 civilians, the watchdog said.

Among the civilians who died on Sunday was a 14-year-old boy tortured to death by regime forces in the southern province of Daraa, said the watchdog, which has reported more than 3,500 child deaths since the outbreak of Syria's revolt in March 2011.

Meanwhile, on Sunday evening Damascus was plunged in a total blackout that lasted through the night, after a key transmission grid that supplies the capital was hit, said the Observatory.

It is unclear what caused the blackout, said Observatory director Rami Abdel Rahman. "Some activists have blamed an air strike."

"The whole city was affected...the situation was strange because it was the first time it ever happened," an anti-regime activist who identified herself as Leena told AFP via the Internet.

By Monday morning, the blackout started to ease, with power gradually returning to the capital, an AFP journalist said.

"Among the civilians who died on Sunday was a 14-year-old boy tortured to death by regime forces in the southern province of Daraa"
I find your words hard to beleive. Especially coming from someone who has the great Bachir as their avitar. There may be a few extremists among the people fighting the regime but that is a direct result of the rest of the world choosing not to help and prolonging this. They will not take controll and it will be better post Assad. That I will bet my arm on!