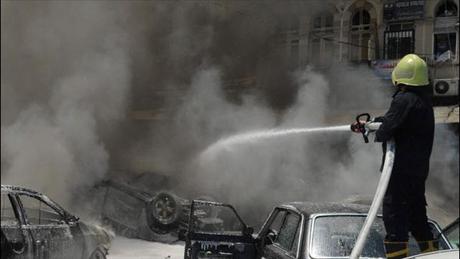 More than 30 people, both civilians and pro-regime militiamen, were killed Monday in a suicide car bombing in the town of Salmiyeh in the central province of Hama, the Syrian Observatory for Human Rights said, reporting another blast in an upscale Damascus district.

A high-ranking regime official confirmed to Agence France Presse that dozens were killed in the Hama attack, which the Britain-based Observatory said targeted a building used by loyalist paramilitary fighters.

The watchdog gave an initial toll of "30 members of the armed pro-regime people's committees killed in a car bomb in front of their headquarters in Salmiyeh in eastern Hama province."

Citing medical sources, the Observatory said there were civilians among the dead and the number of fatalities could rise well over 50 with dozens wounded or in critical condition.

State news agency SANA also reported the blast, saying that "a terrorist suicide car bomb was detonated in the heart of Salmiyeh, leaving a number of people killed and others wounded".

It said that the wounded were being transported to area hospitals.

Earlier on Monday, a powerful explosion rocked the upscale Damascus district of Dumar, the Observatory said, adding the blast caused an unknown number of deaths.

Dumar is one of seven wealthier districts that straddle Damascus from northwest to southeast.

The rebel Free Syrian Army has no presence in these districts, which are populated by higher income groups who fear instability and want to preserve their economic interests.

But even the heart of Damascus has not been spared the violence, having been hit by a series of spectacular attacks, mainly claimed by jihadist groups, including twin suicide car bombings that struck Umayyad Square in the city center in September.

To operate in inner districts of Damascus at all, the rebels rely on rear bases in the outskirts of the city where the army is locked in a protracted battle to push them back.

The blasts came as Arab League chief Nabil al-Arabi said the mission of the international peace envoy to Syria, Lakhdar Brahimi, has so far not even "yielded a glimmer of hope" to end the country's 22-month conflict.

More than 60,000 people have been killed in the conflict that erupted in March 2011 as a popular uprising against the regime of President Bashar Assad, according to U.N. figures.

I liked the spectacular. They make it sound like 4th of July fireworks. I heard these are smart bombs, they don't kill innocent people. Bashar is one butcher, he will be replaced by tons of them.

no they are pacific, they do not shell civilians: they prefer to shell israel. they never use heavy weapons against civilians: they reserve it to israel. they don t use missiles which they launch in israel.
they protect more israel than their own citizens which they prefer to bomb! glorified and praised by the lebanese "resistance" ! glorified by M8ers with all the daring attacks they did for decades to liberate their country against the enemy! lol! lol!!!!

it looks like israel is their ally and syrians their enemies !!!!!!!