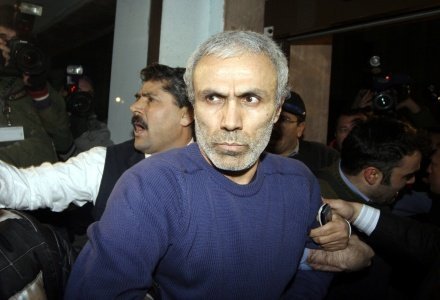 The Turk who shot pope John Paul II in St Peter's Square in 1981 claimed in a new book on Friday that the founder of the Iranian revolution, the late Ayatollah Ruhollah Khomeini, told him to do it.

The Vatican immediately denied several assertions in the book including the claim by Mehmet Ali Agca that he had spoken of the Iranian link at his meeting with John Paul II in his prison cell.

Ali Agca, a former far-right extremist and Islamic fundamentalist, said he was "indoctrinated" in Tehran after escaping from a Turkish prison where he was serving time for killing a journalist.

At a nighttime meeting with Khomeini, Ali Agca said the Supreme Guide of the Iranian revolution told him to kill the Polish pope -- who was badly wounded but survived the assassination attempt.

The book has been published in Italian and is entitled "I Was Promised Paradise: My Life and the Truth Behind the Attack Against the Pope."

Following his arrest, Ali Agca initially said the assassination attempt had been organized by the Soviet KGB and a group of Bulgarian diplomats.

He has since been diagnosed with mental problems.

Lombardi said he had spoken to John Paul II's secretary Stanislaw Dziwisz, who was present in the cell when Ali Agca met the pope.

"He absolutely denies that the two men spoke about people who ordered the attack or the Ayatollah Khomeini and also that the pope invited the attacker to convert to Christianity," Lombardi said.

Ali Agca had a different description of the famous 1983 meeting with the pope he had tried to kill.

"Who ordered you to kill me?" Ali Agca said the pope asked him, promising not to reveal the secret.

After Ali Agca told him, he said that the pope said to him: "As I forgive you, I forgive them too."

The reformed extremist said he had "lived for years in the error of Islamic Nazi-fascism" ever since he was a child and now recognized that "Jesus Christ was the best person who walked the earth".

The 55-year-old served 19 years in prison in Italy for the shooting and was then deported to Turkey where he served another 10 years.

It is true that Khomeini instructed him to kill the Pope. He came to him in a dream and he was with horns and fires coming from his head. The guy is a nutcase.