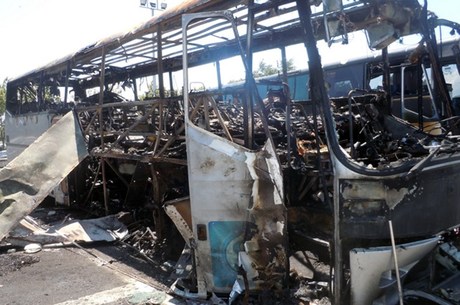 The Bulgarian government said Tuesday that Hizbullah was behind a bomb attack in July that killed five Israeli tourists and one Bulgarian.

"We have information on financing and membership of Hizbullah for two people including the bomber," Interior Minister Tsvetan Tsvetanov told reporters.

"We have well-grounded reasons to suggest that the two were members of the militant wing of Hizbullah," Tsvetanov said after a meeting of Bulgaria's National Security Council. "We expect the government of Lebanon to assist in the further investigation."

Europol Director Rob Wainwright explained to the Associated Press that the bomb was detonated remotely using a circuit board that a Europol expert has analyzed. Although it was initially believed to be a suicide bombing, Wainwright said investigators believe the bomber never intended to die.

Two counterfeit U.S. driver's licenses that were found near the bombing scene were traced back to Lebanon, where they were made, Wainwright said.

He said forensic evidence, intelligence sources and patterns in past attacks all point to Hizbullah's involvement in the blast.

"The Bulgarian authorities are making quite a strong assumption that this is the work of Hizbullah," Wainwright said. "From what I've seen of the case — from the very strong, obvious links to Lebanon, from the modus operandi of the terrorist attack and from other intelligence that we see — I think that is a reasonable assumption."

The investigators found no direct links to Iran or to any al-Qaida-affiliated terror group, Wainwright said.

The High Representative of the European Union Catherine Ashton commented on the ruling later on Tuesday, calling for the prosecution of all those involved in planing and executing the Burgas attack.

"The European Union and its member states are committed to fight against terrorism and all those behind it,” Ashton stressed in a released statement.

"An appropriate response will be discussed and developed based on elements identified by the investigators,” the statement revealed.

Meanwhile, Israeli Prime Minister Benjamin Netanyahu said the Bulgarian finding should push the EU to draw the "necessary conclusions" about the group, hinting it should be placed on a terror watch list.

"The attack in Burgas was an attack on European soil, against a member state of the European Union," Netanyahu said in a statement. "We hope that the Europeans will draw the necessary conclusions about the true nature of Hizbullah."

The bombing on a bus carrying Israelis at Burgas Airport on Bulgaria's Black Sea coast, the deadliest attack on Israelis abroad since 2004, also killed the Bulgarian bus driver and the bomber. Some 30 people were wounded.

Immediately after the attack, Israel blamed Iran and what it called its "terrorist proxy" Hizbullah for the bombing.

Iran has denied any involvement.

Canada, meanwhile, said it is taking "very seriously" the linking of a Canadian passport holder to the bomb attack.

"Canada takes the reported involvement of a dual national living in Lebanon very seriously and is working with Bulgarian authorities," Canadian Foreign Affairs Minister John Baird said in a statement.

Baird commended Bulgaria on its "thorough investigation" and described as "convincing" alleged evidence of Hizbullah's involvement in the "heinous attack in Burgas."

"We urge the European Union and all partners who have not already done so to list Hizbullah as a terrorist entity and prosecute terrorist acts committed by this inhumane organization to the fullest possible extent," he added.

Hizbullah was banned in Canada as a “terrorist organization” in 2002.

about time the Bulgarian government to advise clearly their findings.
now it is confirmed and hizbushaitan is closer to being disintegrated from the face of the earth.

Scum Iranian terrorists calling themselves the people of God aka the resistance! Cold blooded murderers!

This can't be! Hizb is a victim of the western media and Isreali consperacies. It was Isreal that did this to frame the hizb.

Would not discount it 100 percent. However, it is very likely to be the HizbM

Let's look at history shall we? as evil and as demonsterous Isreal has been to arabs, when has Isreal ever shown to kill its own people? Never! that is a privilage that arabs hold onto with pride. This was no doubt done by someone other than Isreal and if the data points to Hizb then its the Hizb. what possible motive would Bulgaria have to fabricate this? sometimes a little common sense can go a long way in life.

I was actually going for sarcasm. Maybe I shoud have pointed that out!

I am being sarcastic!

kiserwanimoughadram, that assassination attempt was not fake but it was not conducted by Arafat's followers rather it was carried out by a group opposed to Arafat but Israel disregarded that fact and decided to say it is Arafat in order to have a cause to invade

This iranian tumor is deteriorating and always will deteriorate the Lebanese health. Those iranians proxies are malignous cancerous tumor destroying Lebanon and its image

Queue in Iran, Syria and the domestic HA apologists saying how this was a zionist conspiracy and how HA has an angelic halo around it.

If the Hizb was responsible, it shows a significant deterioration in capacity to hit such a soft target - touristsn come on! Is that the best the Hizb can conjure up!

Im not with Hizbullah but it smells like mossad when it involves "fake passeports" .

Im not with hizbullah but it smells like mossad big time!

Did any1 see the footage? The bomber clearly looks "western"(white, non Arab)... If hizballah realy has that kinda capability, more power to them!

Even before Israel was created, after ww2, they chaced down nazis to the ends of the earth to make them pay for their crimes. We have that same right.

Plenty of Lebanese don't look like Arabs. They must have picked these two for their morphology in order not to stand out next to the Jews.

Civilians? Every Israeli citizen, men n women, have to join the army. Only the super orthodox are exempt, but they still have to serve in a religious maner.

So, if anything, they were ex-army, or reservists... But not civilians.

Zionism is cancer. Not until they taste defeat will they make real peace with us. It's the only language they understand.

Most of you here are naive. I remember the evidence we were shown about Iraq WMD with sattellite pictures and all. Guess what? It was very true. If Israel and the US wants something, trust me we can make a file for each of you proving you are a terrorist, your mother will believe it, in your case maybe yourselves too.

STHU fake American...no such footage exists. WMD argument was a pretext backed up by false intelligence and a strong desire to interfere in IRAQ while hoping the side effect would ridding Iraqis of Saddam. The real purpose was oil and apparently we cam home with out it while construction contractors made millions. The biggest losers? The innocents who lost their lives and the American Tax payer who was duped into believing it was a necessary war.

You should change your name to Mahboul.

As soon as you change your name to fakeamerican you imposter you!

Whether this is true or not, it changes nothing. Both Iran and the US will continue to meddle in Lebanese affairs.

I as a Bulgarian, think that all the confession is a bull shit. The Bulgarian government is in a subordinate position. Netanyahu has said at the first hours after the attack that Hesbullah stands behind it and it was a matter of time to be confessed officially. I am certain that there are no evidences behind accusation. As we use to say it is quite easy to convict anyone's sister as a whore! Let him after prove that he has no sister! I will not surprise if actually the Israeli stand behind the bombing, as they have always sell their brothers for the "right" cause.

Good point Starsky, this is the difference between democracy and shitty countries ruled by propaganda and terror. In a democracy you can't lie forever... Wake up people!

Surprise surprise! About time they start tightening the rope around the neck of that criminal organisation called Hizbollah, who's had it too easy for the last 30 years under different nicknames! Has any other lebanese party been ever cited by any foreign jurisdiction in criminal cases: from Argentina, to Azerbaidian, to Egypt, to Thailand, now Bulgaria, etc... apart from this dirty organisation? Add to that the killing prowess they have shown in physically eliminating their political opponents over the years, where there is always a HIzbollah fingerprint left behind! Pure filth !

Death to Hizballah, death to Nasrallah and his sons, death to Bashar, death to ahmadinjad, death to Natanyahu. They all share the same bed.

ya andre, I would not make death threats on the internet like that...think ya man.

Hello Bandoul. These aren't death threats, I just voice my support for their death.

Thanks, well said. There are still theories that what supposedly vanished from IRAQ will be found in Syria...I am not holding my breath though. Damn politics...game of the devil.

His angelic and glorious resistance is implicated in myrder again... Innocent till proven guilty right? Looool

Investigation is not yet concluded but yes, generally this goes to Interpol asap. And since this is EU, High representative for foreign affairs and security of Union has to intervene. Afterwards EU can do anything from freezing Hezbollah assets to trade embargo and it will be within international law.

But if I had to guess EU will wait till elections. Afterwards Hezbollah goes on terror list no matter how they´ll end. That will mean freezing Hezbollah and Hezbollah related assets in EU and cessation of any activities like al-Manar stream. In other words to completely isolate HA.

As for penetrators...well, Mossad is skilled in dealing with these types of people.

The investigators found no direct links to Iran.......
What a stupid statement, Hezb and Iran are one and the same.

"the Takfiri fanatic fighting in Syria get the upper hand in Syria, they will flock to Lebanon, and fight HA to liberate" this is crazy, like sending cats to get rid of mice, God help Lebanon.

If the idiots discovered a Canadian passport that belongs to a Lebanese then I would say try again. Those planting a bomb normally carry fake passports.

Lebanon used to export Tabbouleh now we export terrorism at the hands of Saints.