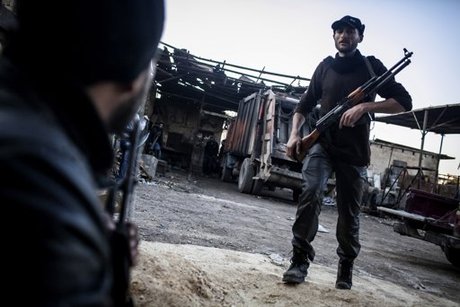 The Syrian army launched an "all-out offensive" on Damascus province on Wednesday, a security official said, as a watchdog reported the fiercest bombardments and fighting in the region for months.

"The province was bombed very badly, in attacks that have not been seen in months. There was also very heavy fighting," said Rami Abdel Rahman, the director of the Syrian Observatory for Human Rights.

A Syrian security official in Damascus who declined to be named said that "the army has launched a coordinated all-out offensive on all of the areas surrounding the capital.

"All entries to Damascus have been sealed," he added.

Local residents said that "unusually intense bombing" was heard throughout the capital all day on Wednesday.

The offensive came as fierce clashes erupted between rebels and soldiers in the northeast and southwest of Damascus, as well as in the southern district of Qadam and eastern Jobar and Qaboon districts in the capital.

These areas of Damascus are among the strongest bastions of the rebellion against the regime of President Bashar Assad.

The watchdog said at least 122 people -- including 32 civilians, 51 rebels and 39 troops -- were killed nationwide on Wednesday.

The U.N. says more than 60,000 people have died in violence since the uprising started in March 2011.

All I have to say is poor civilians. The butcher's army is made of butchers that spare no civilians.

It's starting to look like the fsa was never allowed to win. I think a lebanonization of Syria is the goal. A no winner/no loser "solution", and weak n fragmented society is the way it's heading.

All i have to say is what glorious news....may the dead just pile up.
Long Live The Syrian Civil War!