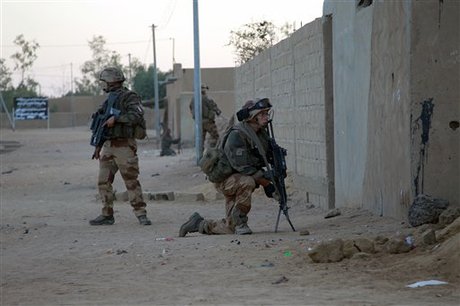 Islamist rebel group the Movement for Oneness and Jihad in West Africa (MUJAO) claimed responsibility for an attack by gunmen Sunday on the city of Gao in northern Mali and a suicide bombing the day before.

"Today God's faithful successfully attacked the Malian army, which let the enemies of Islam come to Gao. MUJAO also claims the suicide bombing yesterday that made the Malian soldiers flee," said Abou Walid Sahraoui, spokesman for the group, which had already claimed another suicide blast Friday, the country's first.

"The combat will continue until victory, thanks to God's protection. The mujahedeen are in the city of Gao and will remain there," Sahraoui said in a message sent to Agence France Presse.

Rebel gunmen attacked Gao, the largest city in northern Mali, in the first large-scale urban guerrilla attack of the conflict.

A witness said the gunmen hid in the city's empty central police station, then attacked Malian soldiers when they arrived. When reinforcements came, snipers hidden in surrounding buildings opened fire on them.

Rocket-propelled grenade explosions and fire from heavy machine guns and light weapons could still be heard in the city late in the afternoon.

A French Tiger attack helicopter was circulating over the neighborhood and French and Malian forces were conducting joint patrols, warning residents that snipers could be hidden in the city.

A death toll could not immediately be established. A Malian officer said "many" rebels had been killed, and a witness reported seeing a body that appeared to be a civilian hit by a stray bullet.

The two suicide bombers were the only fatalities in the earlier attacks.

A Malian soldier was lightly injured in Friday's explosion.

Troops at the checkpoint where both suicide attacks occurred said no one else was wounded in Saturday's blast.