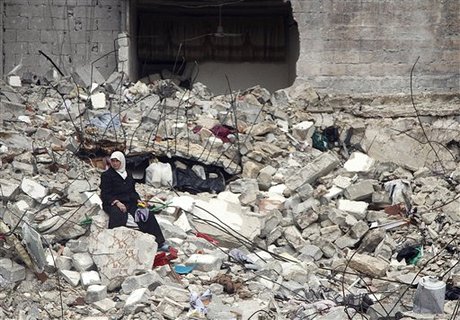 Iran and Hizbullah, are trying to build a network of militias inside Syria to protect their interests there in case President Bashar Assad falls, The Washington Post reported late Sunday.

Citing unnamed U.S. and Middle Eastern officials, the newspaper said Iran's goal appears to be to have reliable operatives in Syria in case the country fractures into ethnic and sectarian enclaves.

Iran claims to be backing as many as 50,000 militiamen in Syria. Efforts to find a political solution to the nearly two-year-long conflict, which has killed more than 60,000 people, appear to be deadlocked.

"It's a big operation," the paper quotes a senior U.S. administration official as saying. "The immediate intention seems to be to support the Syrian regime. But it's important for Iran to have a force in Syria that is reliable and can be counted on."

The Post quotes a senior Arab official as saying that Iran's strategy in Syria has two tracks. "One is to support Assad to the hilt, the other is to set the stage for major mischief if he collapses," that official said.

Tehran's allies in Syria include Shiite and Alawite communities concentrated in provinces near Syria's border with Lebanon and in the key port city of Latakia, the paper said.

Under the most likely scenarios, it is there that remnants of Assad's government -- with or without Assad -- would seek to establish a coastal enclave closely tied to Tehran, according to the Post.

This enclave will be heavily dependent on the Iranians for survival and help them retain a link to Hizbullah, the paper said.

hizbushaitan is going to cost us our country.
fpm is supporting them and engulfed in assisting the Syrian regime (at least through the supply of fuel to the Syrian regime army) which is under embargo.
these 2 entities should be uprooted from our country if we are to have a country.

come on mowaten deny that hezb and iran are not helping the syrian regime to crush the revolution...

FPM supporters weak up to reality

Its funny propaganda and would not worry much about it. Sadly hizballah is doing whatever they want and all the US is willing to do is point it out. The Washington Post can continue to print this till they are blue in the face and nothing will get done about it. I guess after Iraq and Afghanistan the American populous just want to be left out of being the worlds policeman.