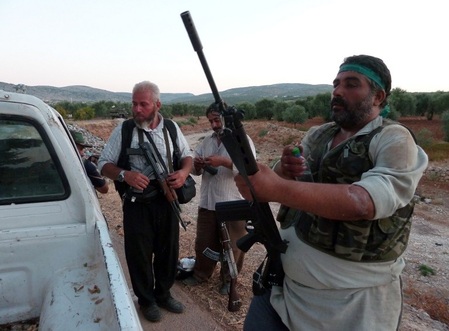 An armed group in northwest Syria on Thursday hijacked a bus and kidnapped at least 40 civilians, mostly women and children, the Syrian Observatory for Human Rights said.

"Most of the victims were women and children, barring a couple of men," said Observatory director Rami Abdel Rahman, whose Britain-based center added they came from al-Fua and Kafraya villages in Idlib province.

Both are majority Shiite Muslim villages, while most rebels are Sunni.

The Observatory said the bus had been en route to Damascus. It did not specify which group was behind the kidnapping.

"The group were probably warlords who have taken advantage of a total security vacuum in areas where the army has pulled out," said Abdel Rahman, who warned that there has been an increase in kidnappings in northern Syria.

"There are many who are taking advantage of the conflict and an absence of centralized power," he said.

"We are very concerned about what may happen to these women and children."

now you trust the Syrian Observatory for Human Rights and Rami Abdel Rahman? ROFL!!! usually you shout that he cannot be trusted! you make fun of him!!!

only when it suits you, huh! LOL! double M8 standards as usual... hahahaha!

lol FT so if you believe syrian observatory rights on this you should believe them everytime... see how twisted and stupid your logic is... only when it suits you... pityful

only cowards or butchers attack women and children....

They will likely exchange for prisoners. Unfortunatelly civilians have become bargaining chips on all side. For those who threaten war in lebanon, we saw all of this and worse during our own wars.