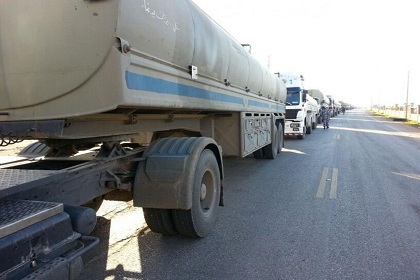 Hundreds of protesters staged a sit-in Saturday in the Masnaa-Bar Elias area in Lebanon’s eastern Bekaa valley, the main road linking Beirut to Damascus, blocking the passage of fuel tankers to war-torn Syria.

The demonstration, organized by the Association of Muslim Scholars, was staged in the eastern Bekaa Valley to stem fuel supplies intended for forces loyal to Syrian President Bashar Assad.

"We are here to obstruct the passage of fuel tankers, which we believe are transporting fuel to propel the killing machines in Syria," said Sheikh Yehia al-Baridi, one of the protest organizers.

About 15 trucks were forced to turn back to Beirut by the estimated crowd of about 300 people, around 20 of whom were Sunni Muslim sheikhs or clergymen, said Agence France Presse reporter.

The protesters called on the authorities to take a stronger position on the Syria crisis, and to stop allowing fuel supplies across the border.

"We are warning the Lebanese state... we as Sunni Muslims believe these tankers carry the fuse to ignite sectarian conflict" in Lebanon, said Baridi.

Though formally neutral on the war in Syria, Lebanon is deeply divided over the conflict, with the March 14 bloc opposed to Assad's regime, while Hizbullah and its allies supporting it.

Saturday's action was the second time this month that Lebanese protesters have taken matters into their own hands, after dozens cut off two northern border crossings to protest diesel fuel transfers to Syria's regime on February 13.

The violence in Syria has also spilled over into Lebanon on occasion, with cross-border shellings in the north and east, and Syria-related clashes breaking out in flashpoint areas such as Tripoli.

Damascus dominated Lebanon militarily and politically for nearly 30 years, until an international outcry over the assassination in Beirut of prime minister Rafik Hariri forced a Syrian troop pullout in 2005.

Who are those "Association of Moslim Scholars"?, never heard of them. Are they Scholars or hoodlums? For the sake of Lebanon, if they consider themselves Lebanese, they should stay out trouble and intefering in politics. God save Lebanon, it is an empire of politics and religions.

Good job , they should've done the same when the Syrian regime was in Lebanon , instead they raised Assad photos and made business with Syria , hmmmm

apples and oranges--we didn't have a civil war, scratch that, we did, but not at the time that you were talking about it. In addition, we import fuel stuffs and the stuff is getting more expensive each week--maybe easing the supply in Lebanon may help stabilize prices a bit here.

Lebanon did not invade syria, did not destroy its cities and killed its leaders.

Sunnites are enemies of Lebanon.