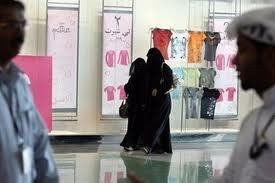 King Abdullah has issued a decree limiting work in lingerie shops to Saudi women only in a bid to reduce high female unemployment in the conservative kingdom, state media reported Monday.

SPA news agency said the king also made employment at certain industrial facilities, including drug manufacturers, exclusive to Saudi women, and backed a program to encourage production by families.

The issue of Saudi women working in lingerie shops was at the center of a row three years ago between the labor ministry and the powerful religious authority which issued a fatwa banning such jobs.

Saudi women have long complained they feel uncomfortable having to buy lingerie from men and would prefer female sales assistants.

Fatima Garub, the founder of a campaign on social networking website Facebook called "Enough Embarrassment", welcomed the king's decision, saying it would create about 6,000 jobs for Saudi women.

"From now, embarrassment will end. We thank the king who felt our problem and took the decision that we have been waiting for a long time," said Garub.

The decree gave the ministries of interior and labor one month to implement the decision.

Unemployment among women in the oil-rich Gulf state is estimated at about 30 percent.