Clinton Heads to UAE for Talks on Libya 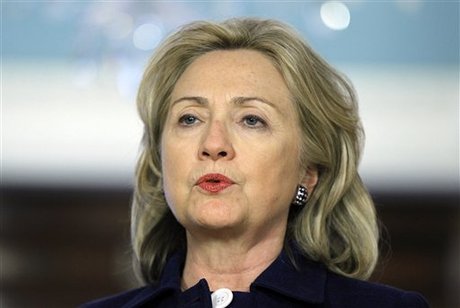 The talks in the United Arab Emirates (UAE) capital on Thursday come after President Barack Obama said NATO's mission in Libya was forging "inexorable" advances that meant it was only a matter of time before defiant Moammar Gadhafi's departure.

The so-called International Contact Group meeting will build on a May 5 gathering in Rome where Clinton and her partners agreed on a new fund to aid Libya's rebels and promised to tap frozen assets of Gadhafi's regime.

U.S. officials said the participants will discuss a "range of issues," including implementation of U.N. Security Council resolutions 1970 and 1973.

Resolution 1970 imposed bans on assets and travel on members of Gadhafi's regime as well as an arms embargo.

Resolution 1973 authorized "all necessary measures" to protect Libyan civilians, including air strikes on Gadhafi's ground forces and a no-fly zone.

The International Contact Group on Libya, which includes all the countries participating in the NATO-led campaign targeting Gadhafi's regime, held its inaugural meeting in Qatar, which participates in the NATO mission.

NATO has intensified its campaign, launching daily raids on Tripoli, but only nine of NATO's 28 member states are taking part in the strikes. France and Britain are bearing the brunt of the load with helicopters now in their arsenal.

The other countries are the United States, Canada, Norway, Denmark, Belgium, Italy and non-NATO state the United Arab Emirates, which sent 12 warplanes to enforce the no-fly zone.

Countries such as Spain and the Netherlands, and non-NATO partner Sweden, have contributed combat jets but their roles are limited to enforcing the no-fly zone aimed at preventing Gadhafi attack planes from taking off.

Turkey, which reluctantly backed the mission, is only participating in the naval embargo.

Around a dozen NATO members are not contributing any assets to the mission, including Germany, which has refused to back the United Nations resolution that authorized the mission.

Weeks of air strikes on regime targets have thus far failed to force Gadhafi out, but Obama nevertheless insisted that he was on borrowed time after a brutal four-decades-long rule.

The president, criticized by some domestic opponents for allowing Britain and France to take the lead in the NATO mission after an initial U.S. blitz, argued that the effort had already achieved substantial goals.

Meeting with German Chancellor Angela Merkel, Obama said that the port city of Benghazi was now free from the threat of the Libyan regime and that Gadhafi forces had been pushed back from the city of Misrata.

"What you're seeing across the country is a inexorable trend of the regime forces being pushed back, being incapacitated," he said on Tuesday.

"You're seeing defections, often times of some very high-profile members of the Gadhafi government, as well as the military.

"I think it is just a matter of time before Gadhafi goes."

In addition to Nato countries, representatives from the United Nations, Arab League, European Union, Organization of Islamic Conference, and the Gulf Cooperation Council will be at the talks.

After Abu Dhabi, Clinton will travel to Zambia, Tanzania and Ethiopia to discuss trade, development, health and other issues. She is due to return to Washington on June 15.