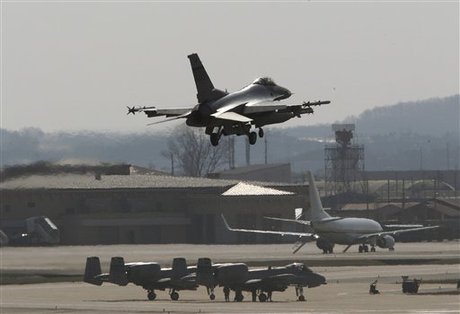 A powerful U.S. military sea-based radar is now in place to detect any possible missile launches by North Korea, according to a senior U.S. defense official.

"The SBX is in position," the defense official, who spoke on condition of anonymity, told Agence France Presse late Wednesday.

The official would not offer more details but confirmed the SBX, a floating X-band radar that resembles a giant golf ball, had reached a location at sea where it could track missiles fired by the Pyongyang regime.

U.S. and South Korean forces remain on heightened alert amid expectations North Korea will launch a missile or multiple missiles before the April 15 celebrations for the birthday of the North's late founder, Kim Il-Sung.

The United States has already bolstered its missile defenses in the region to help protect allies South Korea and Japan as well as U.S. bases in Guam.

Two U.S. Arleigh-class destroyers have been sent to the western Pacific with anti-missile weaponry while ground-based THAAD interceptor batteries had been deployed to Guam, a U.S. territory about 3,380 kilometers (2,100 miles) southeast of North Korea.

The U.S. military also staged shows of force as part of drills with South Korea, with over-flights by B-52 and B-2 bombers as well as sophisticated F-22 fighter jets.

The floating X-band radar, which sits atop a platform similar to an oil rig, had been stationed at Pearl Harbor in Hawaii.

The SBX radar, which is 85 meters (280 feet) tall and operated by civilian contractors, is supposed to detect missile launches over a range of at least 2,000 kilometers.

Meanwhile Yonhap news agency reported that North Korea has been repeatedly moving multiple missiles around in an apparent bid to confuse outside intelligence gatherers ahead of an expected launch.

According to intelligence analysis cited by the South Korean news agency, two mid-range Musudan missiles have been repeatedly moved in and out of a warehouse facility on its east coast.

At the same time, at least five mobile launch vehicles have also been spotted swapping places and positions.

"There are signs the North could fire off Musudan missiles any time soon," an intelligence source told Yonhap.

"But the North has been repeatedly moving its missiles in and out of a shed, which needs close monitoring."