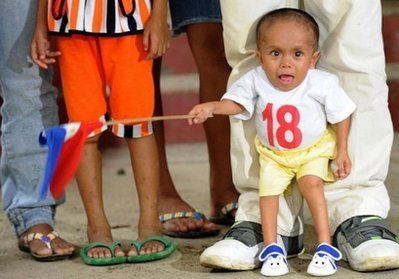 A Filipino blacksmith's son who stopped growing when he was a toddler was declared the world's shortest man Sunday as he celebrated his 18th birthday.

Measuring just 59.93 centimeters, or 23.5 inches, Junrey Balawing is the oldest of four siblings -- the rest all of normal stature -- born in the rural town of Sindangan on southern Mindanao island.

"Officially he is the world's shortest man," said Craig Glenday, editor-in-chief of the Guinness Book of World Records who measured Balawing in front of cheering relatives and villagers.

The previous record holder was Khagendra Thapa Magar of Nepal, who was measured in 2010 at just over 26 inches.

"Thank you to all of you for supporting my son, the world's shortest man," Junrey's father, Reynaldo, told a crush of reporters and photographers.

Junrey then blew out a candle on a cake specially made for him, before telling the crowd in a tiny voice in the local dialect: "Kapoy (I'm tired)."

A throng of well-wishers, including politicians, witnessed the official measurement then handed him wads of cash which his parents said would go towards the family's meager savings.

Junrey's father said he had always believed his son to be special.

He said he had been sickly as a toddler and stopped growing when he was two years old, but all the local doctors who examined him could not diagnose the problem.

His mother, Concepcion, said Junrey has difficulty standing for long periods and has to be assisted when walking.

His uncle, Paulino Empag, who is the local village chief, said friends and relatives were very protective of Junrey and some considered his special condition a lucky charm for the rural, superstitious community.

"He is a very special boy. He has trouble speaking and standing up, but he is God's blessing to his family and to the community," he said.

After the official announcement, Empag said the family was expected to return to their modest home in the village and celebrate Junrey's birthday.

"Noodles and meat have been prepared. We're just happy for him," Empag said.

I could swear this is Mustapha o.Ghalayini.