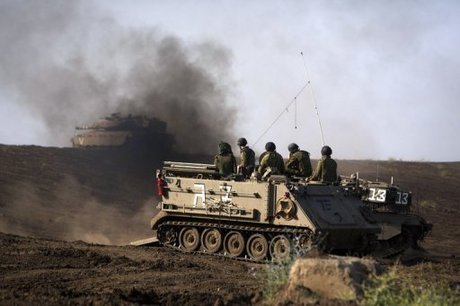 Syria's army destroyed an Israeli military vehicle which it said had crossed the sensitive ceasefire line in the Golan Heights on Tuesday, the military said in a televised statement.

"Our armed forces have destroyed an Israeli vehicle with everything that it had in it... The vehicle had crossed the ceasefire line and was moving towards the village of Bir Ajam, situated in the liberated Syrian zone" of the Golan, it said.

The incident comes amid rising tensions between the two countries.

But the Jewish state denied one of its vehicles had been destroyed.

The incident came after the Jewish state said its forces had come under fire overnight on the Israeli-occupied portion of the Golan Heights.

In a statement, the Israeli military said an army vehicle was damaged in the incident, and that its soldiers returned fire.

Earlier on Tuesday, Israeli soldiers patrolling the disputed Golan Heights along the border with Syria fired back after coming under fire overnight, an Israeli Defense Forces statement said.

"Overnight, shots were fired at an IDF patrol on the border in the central Golan Heights, damaging a military vehicle," said a statement on the army's website. No one had been wounded, it added.

"In response, IDF forces returned precise fire at the source of the gunfire. They reported a direct hit," the statement added.

"The IDF views the recent incidents in the north with concern and has lodged a complaint with UNDOF," the U.N. Disengagement Force responsible for patrolling that area.

On Monday, the army reported that small-arms fire from Syria hit the Israeli-occupied Golan Heights overnight, causing no harm or damage. The army also filed a complaint with the U.N. force on that occasion.

The conflict in Syria has regularly spilled over into the Golan, with four incidents in recent weeks in which fire has strayed across the ceasefire line between the two countries.

It has generally been regarded as accidental spillover not intended to specifically target Israeli troops, though Israel made no statement on whether the latest incident was accidental.

The alleged destruction of the vehicle follows a series of reported Israeli attacks on Syrian soil, including air strikes on May 5 that hit three military sites outside Damascus, killing at least 42 people.

That attack came just days after an air raid in the early hours of May 3 that a source told AFP had destroyed surface-to-air missiles being stored at Damascus airport.

Israel has refused to officially acknowledge the raids, though it has implicitly admitted carrying out a similar strike earlier this year.

But senior Israeli sources have said the Jewish state was behind all three attacks, and was acting to prevent the transfer of advanced weaponry to Hizbullah, a staunch ally of the Syrian regime.

Syria has frequently accused the rebels seeking the overthrow of President Bashar Assad's regime of working with Israel.

The two countries are still technically at war.

Shouldn't the heart of resistance Bashar be fighting the enemy from his borders instead of siphoning weapons to HA in order to keep his front quiet and ours on fire? Go ahead Liberate your land and then Palestine, we paid high enough price already for your proxy wars from Lebanon.

don't you see that it is too late ?
just now and after all what happened you said it will come ?
brain washed really... sad to read your stupid comments from time to time.

The Syrian regime will never attack Israel..why should they they have there Lebanese traitors to do it for them..

syrian army is very very smart like its leader bachar... but what upsets me is that they want to feed me their stupidity and cowardice

I love it. Screw the Jews.

Here you go again with your filthy hatred.
Why screw the Jews, why not screw Hizballah, Screw Iran, Screw Assad, and then in the end, SCREW YOU.

the truth is a stray bullet hit an Israeli vehicle.and the IDF destroyed the source of the fire ...So the syrian regime claim to have attacked the vehicle and destroyed it ...only brainwashed sheep like FT and mowaten believe it

No one with a little intelligence believes the desperate propaganda of the butcher Bachar....(except M8rs of course)

"Agence France Presse" as reported by the Assad regime ya "ZAKI" entah…;)

Very smart of Assad to now provoke Israel. That's all he needs now.

I'm surprised that Harir and his masters haven't expressed outrage and condemned Syria for their actions in attacking a Jewish vehicle.

not as surprising as Bashar and Hassoun not calling this a "divine victory".

wahahaha!!! after decades now the syrian army tries to look abaday by destroying a vehicle! best joke ever! after decades protecting the golan now they start to pretend to "resist"? ROFLMAO!!!!

the syrian army is just good to bomb its own citizens and destroy its own country! resist against israel? ROFLOL!!!

Not that I believe this is true or there would be a massive bombardment of the area by Israel especially at the source of the fire. But it is hilarious that NOW. After all this time Syria is trying to act like the "heart of the resistance" title really does define them. In my humble opinion. Bashar will not risk getting into a confrontation with Israel at this time. He has his hands not only full but overflowing. Getting Israel into this would surly seal his fate. Bashar as much as I hate him is not stupid. At the end of the day this is utter crap. And the whole idea of Syrian resistance is equally crap. Bashar jailed people who dared throw a stone at the occupied territories. He never wanted risk his behind. Why would he? He has Lebanese.

How come the news of this is only here and on no bonefide site elsewhere?
Good for Syria for destroying the Israeli army single handed! loooool it will take the IDF 25 years to recover from this.