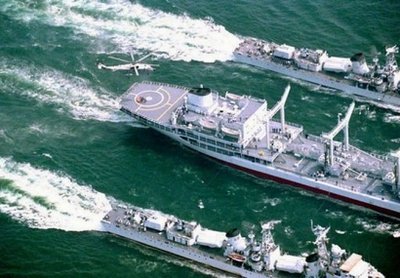 The Philippines said Friday it would send its ageing navy flagship into disputed South China Sea waters amid rising tensions with Beijing over their competing claims.

However defence department spokesman Eduardo Batac insisted the deployment was a routine assignment and had nothing to do with an announcement by China on Thursday that one of its maritime patrol vessels would pass through the area.

"I don't think these are connected," Batac told reporters.

Batac said he was unaware if the Chinese vessel had reached waters claimed by both countries.

He also did not say when the Philippine vessel would be dispatched or exactly where it would go.

The Rajah Humabon, a former US Navy frigate that was commissioned during World War II, is one of the world's oldest warships. It began service in the cash-strapped Philippine Navy in 1980.

The Philippines has competing claims with China, Taiwan, Vietnam, Malaysia and Brunei over potentially resource-rich areas in the South China Sea.

Tensions in the long-running dispute have flared in recent months amid allegations by the Philippines and Vietnam that China has become increasingly aggressive in staking its territorial claims.

The Philippines accused China this month of sending naval vessels to intimidate rival claimants around the Spratly Islands in the South China Sea.

The Philippines also accused China of installing posts and a buoy in nearby areas, opening fire on Filipino fishermen and intimidating a Philippine oil exploration ship with a patrol vessel.

China has maintained throughout the flare-up that its has sole sovereignty over the waters, but that it intends to resolve the dispute peacefully.