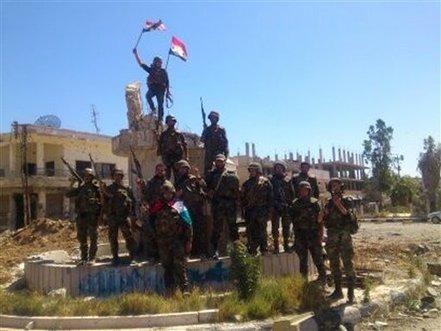 The army vowed on Wednesday to trounce rebel fighters across Syria hours after recapturing Qusayr following a more than two-week assault on the strategic town on the border with Lebanon.

"After successive advances in the war against organised terrorists, our armed forces say they will not hesitate to crush the armed men wherever they are and in every corner of Syria," it said in a statement.

"Our armed forces have been securing and cleaning the town since dawn after a series of delicate operations," said the statement carried by state news agency SANA.

The army said the "heroic victory" sent a "clear message to all involved in the attack on Syria, headed by the Zionist enemy (Israel) and its agents in the region and on the ground.

"The armed forces are ready to face any aggression against our country.

"Our battle against terrorism will continue to bring security and stability to every inch of our land," said the army statement.

Earlier, state TV had said that regime troops "restored security and peace" after successfully dismantling the "terrorist networks" operating in the town over the last few days.

Lebanon's al-Mayadeen TV, which has reporters embedded with Syrian troops, was reporting live from the town, showing images of damaged buildings. The reporter said there was no sign of fighting.

Government troops, backed by Hizbullah fighters, began a wide offensive on the strategic town, which lies near Lebanon's northeastern border, on May 19.

Both sides in the conflict value Qusayr, which lies along a land corridor linking two Assad strongholds, the capital of Damascus and an area along the Mediterranean coast that is the heartland of his minority Alawite sect.

For the rebels, who had been in control of the town shortly ever since after the uprising against Assad began in March 2011, holding Qusayr meant protecting their supply line to Lebanon, just 10 kilometres away.

In the past week, rebels in Qusayr called on fighters from all over Syria to come to their aid in the town, and foreign fighters were suspected to be playing a large role in the city's defense.

The Qusayr battle has also laid bare Hizbullah's growing role in the Syrian conflict. The party, which has been fighting alongside Assad's troops, initially tried to play down its involvement, but could no longer do so after dozens of its fighters were killed in the town and buried in large funerals in Lebanon.

Didn't General Aoun said previously that in syria will end on tuesday? dats what happened no?;)

Qusayr may be Assad's victory and next will be Aleppo but the US-NATO-GCC cabal would rather there be endless war than a peace that they do not control for their colonial neoliberalism. America's "War on Terrorism" is set to last for decades ... according to the Americans whose terrorists are anybody that stands in their way.

Now we can all say that the NostraDamsels have been... well... umm... duh... wrong? again at predicting the imminent fall on a Wednesday of the "ASSad" regime for the 7,582nd time. I cannot name all the Nostras for tightness of space, but I shall list the most prominent starting with the newest inductee: NostraHarrier, NostraGabbyMarch14, NostraAllouchti, NostraPeace, NostraThePatriot, NostraPrimeSuspect, NostraGeha and the daddy of all Nostras, NostraDrArreet7akeh himself. Congratulations and a la prochaine, dudes and dudettes.

Finally,,
Long Live Sayed & Bashar & Najad our greatest dream team. on a roll and unbeatable!! hourayyy
FSA pack and go back to dagastan..

Best news ever, definitely worthy of "TEKBIRRR". Congratulations to every true Arab that believes in freedom and Arabian pride. Hizzballah, President Bashar and their loyal, brave fighters have sent a clear message to the USA and the jews that we will not allow you or anyone control us, our land or our way of life. May every Martyr that has selflessly given his life to this cause rest in heaven. Deni ilak ya shahid.

Naharnet insists calling the Syrian Arab Army incorrectly as Assad Army. You are either too biased or too stupid. Just be fair once in your life

Shites and Ali worshipers need know that they are only 5 to 10 per cent of the population of greater Syria and need to behave themselves as a minor town attacked will not give victory.

Man just go live in the Gulf among your shieks. Syrians regardless of religious sect have co existed with one another in peace for decades, the meddling of the USA zionists puppets being the members of GCC have funded this meaningless crusade. So no need for your racial sectarian threats.

What ever helps you sleep better at night.

There are no Arabs, next phase is to liberate Syria and Lebanon from the Arab occupation and to say next is Israel, reminds me with the proverb which says "Bodies of mules and the dreams of birds"

All of the Syrian military and all of Hizb Allah took 3 weeks to take a town of 20 thousand people. Good work! At this rate it'll take you a few decades to take the rest of the country. But the Assad forces are so heroic that even with full air support they need thousands of fighters from Hizb Allah, Iraq and Iran to take a small town.

If Israel wanted to destroy Assad in this war they could wipe out all of Assad's heaviest forces in days from the air. Just like they bombed near Damascus before with zero losses. Of course, Israel doesn't actually want Assad to get overthrown so they won't.

"The army said the "heroic victory" sent a "clear message to all involved in the attack on Syria, headed by the Zionist enemy (Israel) and its agents in the region and on the ground."

What kind of army is the syrian army? It couldnt even do anything without the hezb el shaytan. Pathetic army. If i was a bashar thug then i would be ashamed of that army.

Yeah and FSA recruited every Muslim reject thug world wide in the name of jihad! Your conceding statement doesn't change the fact that Qusair is under the control of the Syrian army.

What is good? The fact that your army cant fight? You should be ashamed of it.

Everything has to be turned as a victory, especialy killing your own civilians thats a great victory. The real answer here is that Quasayr alone has had more civilians killed by the regime than Israel has done in over 40 years. So who is Iran fighting for again?