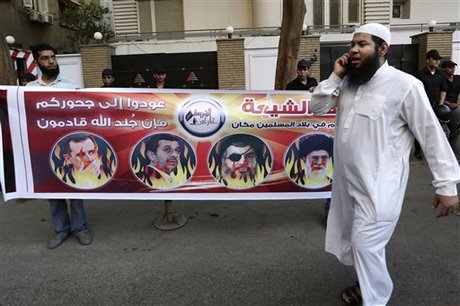 Thousands of Islamists rallied in the Egyptian capital on Friday in support of calls by Sunni Muslim clerics for a holy war against the regime of Syrian President Bashar Assad.

The demonstration took place outside a Cairo mosque where Saudi preacher Mohammed al-Oreifi called in a sermon for a "jihad in the cause of Allah in Syria."

Oreifi urged worshipers to "unite against their enemy."

Saudi Arabia, like Egypt, is an overwhelmingly Sunni Muslim country, and Sunnis are the backbone of the revolt against Assad, whose Alawite sect is an offshoot of Shiite Islam.

Demonstrators, most of them bearded and wearing the traditional white galabiya, shouted "there is no God but Allah, and Bashar is his enemy."

People waved not only the Egyptian flag but also the one adopted by the Syrian opposition.

On Thursday, influential Sunni clerics from several Arab states called for a holy war against the "sectarian" regime in Syria.

"We must undertake jihad to help our brothers in Syria by sending them money and arms, and providing all aid to save the Syrian people from this sectarian regime," they said in a statement at the end of a gathering in Cairo.

They called the "flagrant aggression" of Iran and Lebanon's Hizbullah -- both Shiite -- and their "sectarian allies" in Syria "a declaration of war against Islam and Muslims."

Hizbullah has been fighting alongside Assad's forces, and its leader, Sayyed Hassan Nasrallah, said on Friday it would continue to do so.

Hizbullah's intervention in Syria, which helped Assad's troops overrun the strategic town of Qusayr, has been roundly condemned by Arab countries.

In Cairo, a senior aide to President Mohamed Morsi demanded on Thursday that the group "immediately end" its involvement in Syria.

The Shiite group's assistance to Assad could "further turn this conflict into a sectarian conflict that will spill over into the entire region," Khaled al-Qazzaz said.

Qazzaz, Morsi's secretary on foreign relations, said the government was not trying to stop Egyptians from volunteering in Syria, mostly in relief work.

"The right of travel or the freedom of travel or taking certain positions is open for all Egyptians," he told reporters at a briefing.

"But we did not call on Egyptians to go and fight in Syria," he said.

Egypt believes the conflict will have to be resolved politically, he added.

The conflict has drawn Sunni volunteers from several Arab countries to join rebel ranks. In addition to Hizbullah, Shiites have traveled from Iraq to support Assad.

During Friday's rally, 22-year-old student Ossam Zeyd said "I am here to support the Syrian people. I am participating in jihad in Allah's cause by prayer and by sending money."

A number of Egyptian humanitarian organizations have set up stands outside mosques to collect funds for Syrians.

And Egypt's Muslim Brotherhood, from whose ranks Morsi comes, will hold a gathering on Saturday at a stadium in Cairo under the slogan "in support of the Syria revolution."

i never hated shia people......but if they support assad they are my enemy.
i hope irans leaders are happy, a sunni tidal wave is about to drown the shia in blood......i never wanted this to happen, we were supposed to be one........together.
but no...you want sunni blood?
prepare for war.......although it seems you already were prepared.
allah hates man to kill one anther... but he hates oppression even more and for his sake ....i am prepared to cleanse the earth.