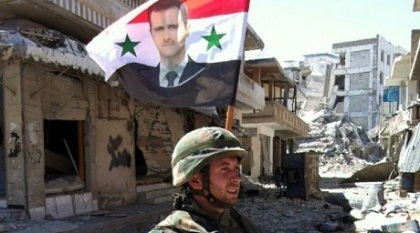 The U.N.'s top human rights forum on Friday condemned the involvement of foreign fighters in Syria's civil war, singling out the pro-regime forces sent across the border by Lebanon's Hizbullah.

The 47-member U.N. Human Rights Council backed a resolution from the United States, Britain, Qatar, Kuwait, Saudi Arabia and Turkey, with 37 votes in favor, nine abstentions and just one member, Venezuela, against.

The text said that the council "condemns the intervention of all foreign combatants in the Syrian Arab Republic, including those fighting on behalf of the regime and most recently Hizbullah".

It said that the involvement of foreign forces in the conflict "further exacerbates the deteriorating human rights and humanitarian situation, which has a serious negative impact on the region".

At a May 29 sitting the council had also condemned the Syrian regime's use of foreign fighters in the besieged town of Qusayr, near the Lebanese border, and ordered an urgent probe into the killings there but stopped short of naming Hizbullah.

Friday's resolution condemned "in the strongest terms all massacres taking place in the Syrian Arab Republic and stresses the need to hold those responsible to account", as well as "all violence, especially against civilians, irrespective of where it comes from, including terrorist acts and acts of violence that may foment sectarian tensions".

It also noted the "widespread and systematic gross violations of human rights and fundamental freedoms and all violations of international humanitarian law by the Syrian authorities and the government-affiliated Shabbiha militias".

At the same time it also condemned similar abuses by rebels, but underlined that a U.N. commission of inquiry had stated that they had not reached the intensity and scale of those committed by the regime camp.

The council also reiterated its demand that Syria admit the commission of inquiry, which was set up in September 2011 but has failed to win entry.

The council vote came a day after new figures from the United Nations showed that at least 93,000 people -- including 6,500 -- have been killed since the war erupted in March 2011 after protests against Syrian President Bashar Assad.

More than 1.6 million Syrian refugees have fled to neighboring countries, and the U.N. warns that the number could more than double this year.

hizushaitan baby killers lovers: how does it feel to be hated all across the world?

the BIG difference is that syrian army belongs to a state and act exactly like the terrorists you are slamming making your idols no better....