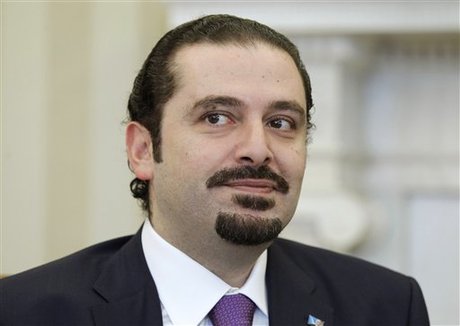 Nasrallah “showed skill in exploiting the pains of those who were wounded in the confrontations with the Israeli enemy to cover up for the involvement in fighting against large segments of the Syrian people,” Hariri said in a statement issued by his press office only hours after a speech by Nasrallah marking the Wounded Resistance Fighter Day.

"But Sayyed Hassan was not successful or eloquent in attributing the crimes his party is taking part in in Syria to the al-Mustaqbal Movement and in his claims that the movement is sending fighters and burying the dead in Syrian territory," Hariri added.

He described the remarks as "fabricated by Sayyed Hassan Nasrallah's imagination and totally false," strongly denying "organizing or sending a single individual to fight in Syria."

Hariri asked: "Who is the side that tasked Sayyed Hassan with following up (on the Syrian conflict), and did he request a cabinet session to ask whether Lebanon needs to fight a self-defense battle in Syrian territory?"

He also wondered whether Nasrallah had asked President Michel Suleiman about his opinion on "the participation of the Lebanese army in the battle of defending Lebanon."

"Sayyed Hassan Nasrallah sought to replace the entire Lebanese state with Hizbullah's Shura Council and to prove once again that he does not acknowledge the state and its institutions, presidencies and armed forces, because he only acknowledges one authority: the authority of the supreme leader of the Islamic Republic of Iran, Sayyed Ali Khamenei,” Hariri went on to say.

“Is shooting dead the southern young man Hashem al-Salman permissible? Is firing on the children, women and elderly of Syria permissible? Is fighting in Qusayr's streets considered a contribution to the building of Syria?” Hariri added.

“It is haram (impermissible in Islam) to implicate Lebanon and expose the interests of its people to danger and it is haram to insist on an unknown path that will lead to destruction … and yet you are demanding a cabinet in which you have the one-third veto power and you want the Lebanese to approve of your decision of continuing to defend Bashar Assad's regime,” Hariri said.

Earlier on Friday, Nasrallah said Hizbullah will stay involved in the Syrian conflict, after having helped regime forces recapture the key town of Qusayr from rebels.

He noted that “thousands of (anti-regime) fighters have come from all around the world and the entire world is fighting in Syria through money, weapons and media.”

“After two years we realized that they are insisting on continuing the battle, even if Syria was destroyed and the regime fell ... and the alternative is the groups that are killing and slaughtering people,” Nasrallah added.

He noted that Hizbullah was “the last party to intervene in Syria while al-Mustaqbal Movement and other Lebanese parties were the first to intervene, not to mention the other nations, groups and organizations.”

Defending the intervention, he said: “There is a front that was targeted by the Americans, the Israelis and the Takfiris, and we were attacked when we intervened on the side of this front.”

Allahû Akbar for a statement that cannot be truer.

CenturyIdiot aka BSthrower....all your posts are soooooooooo lame. Very likely a graduate of HA sheep Conditioning U!

LOL, I thought Hariri was returning to Lebanon "soon"?

"did he request a cabinet session to ask whether Lebanon needs to fight a self-defense battle in Syrian territory?"

hezbis all but ask their gvt for anything as they arrogantly beleive they are the government... they do not care about anything called lebanese state as long as it is against their interests... thugs do the same...

only for his brainless sheep... he is losing otherwise "hearts and minds" in the whole world.... these are facts easy to verify....

@haile: Ya mou3ak every word he said was true, whether you like who said it or not, it is a fact and the truth hurt so you begin calling him names...

So the immature boy spoke, therefore he is! Now cheikh Saad al-Haribi Telteyn al-Marajil can go back to his Mortal Combat on PlayStation while those who yafdou bel ro7 wal dam, aka ahl al sanni are getting pummeled in the real combat.

"Who is the side that tasked Sayyed Hassan with following up (on the Syrian conflict), and did he request a cabinet session to ask whether Lebanon needs to fight a self-defense battle in Syrian territory?".... Nasrallah was tasked by the Ayatollah and I am sure he had a cabinet session with the Glorious Axis when he was on his last pilgrimage to Iran.

To all of you un-educated fellow Lebanese, have you forgotten what the Syrian,s did in Lebanon, destroying "Lebanon on our heads" have you forgotten Israel distraction of all of Lebanon. Please do keep support your faction, religious sect whether you are in the south or north. Keep taking sides pretending that this is the right pass to build your country. Unfortunately you are both uneducated, an educated one will sit and watch both Israel and Syria fight each each OUT OF LEBANESE SOVEREINGTY AND TERRITORY. Please stop hiding behind the boggy man is coming to Lebanon. The boggy man who ever he is will not come as long as you are one nation under god. Wake up you uneducated fellow lebanese. Start thinking how to build your economy

attacking stupidly a person instead of his words or ideas only prove how shallow and empty your ideas are... typical response of a conditionned sheep....