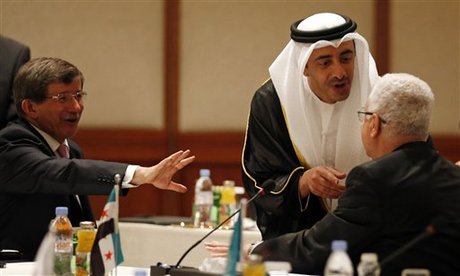 Syrian rebels urged friendly world powers on Thursday to provide them with heavier weapons and to impose a no-fly zone over parts of the country they control to avert a humanitarian disaster.

On the ground, troops and rebels battled in several districts and suburbs of Damascus, and the army shelled insurgent positions using heavy artillery and mortars, the Syrian Observatory for Human Rights said.

Western and Arab powers from the so-called Friends of Syria group will meet in Doha on Saturday, and Free Syrian Army spokesman Louay Meqdad said "the regime could use Scud missiles with unconventional warheads to shell liberated areas. So we need a safe haven."

"It is necessary to establish secure areas and impose no-fly zones in the south or north," he told Agence France Presse in Dubai.

Calling for anti-tank and anti-aircraft weapons, he said that "if they do not provide us with arms to protect civilian areas, a humanitarian disaster will occur because regime troops are committing massacres in the areas they are recapturing".

Meqdad said "foreign militias, including Hizbullah and Abulfadhl al-Abbas brigades (made up mainly of Iraqi Shiites) do not respect any international conventions".

Western powers have so far refused to arm rebels fighting Syrian President Bashar Assad's troops -- backed by Shiite militias from neighboring countries -- out of fear they could fall into the hands of radical Islamists.

But Meqdad said "we are committed to ensuring that these weapons do not fall into the hands of unorganized or extremist groups".

FSA chief of staff General Selim Idriss is seen as a reliable partner by the West, who mainly voice fears of groups such as Al-Nusra Front, whose aim is to establish an Islamic state in Syria.

Meqdad said the regime has been amassing troops in preparation for an offensive on rebel-held areas on the outskirts of Damascus and second city Aleppo.

The expected campaign comes after Assad forces regained control of the strategic town of Qusayr, on the border with Lebanon, with Hizbullah help.

On Thursday, President Michel Suleiman urged Hizbullah to end its participation in the war and "return to Lebanon... because this intervention leads to tensions in Lebanon".

The opposition has said Hizbullah forces are now deploying at other key sites in the country, including in the north.

"If they (Hizbullah) participate in the battle in Aleppo and there are more deaths in the ranks of the party it will raise tensions further. Qusayr must be the end, and they must return to Lebanon," Suleiman said.

In Moscow, meanwhile, Russian Foreign Minister Sergei Lavrov said the West was dragging its feet on agreeing to a date for a peace conference because "they are not at all sure that they will be able to sell the opposition".

Speaking of this week's G8 summit in Northern Ireland, Lavrov said Russia pushed for a concrete time frame to be spelled out but its Western partners refused to do so.

The opposition has long insisted that Assad's departure is a precondition for any settlement, and said it "reserves the right to use all means at its disposal" to bring him down, "chiefly military action".

The army, in some instances backed by Hizbullah, was seeking to retake rebel positions in suburbs south of the capital, and to cut off supply lines to others inside the capital, the Britain-based Observatory said.

Meanwhile in the war-torn country, Syrian troops and rebels battled in several southern and eastern districts of Damascus on Thursday, the Syrian Observatory for Human Rights said, adding the army used heavy artillery to target some insurgent positions.

Clashes that began a day earlier in the north-eastern Qabun neighborhood were continuing, as army troops sought to storm the district, firing mortar shells and heavy artillery, the Observatory said.

Several homes in the area caught fire as a result of the bombardment, the group said.

The northern Barzeh district and eastern Jubar neighborhood, both home to pockets of rebel fighters, were also under fire.

In the south of the capital, the contested neighborhoods of Al-Hajar al-Aswad and Qadam were the scene of ongoing clashes, with shelling forcing the closure of the road leading to the Palestinian Yarmuk refugee camp.

A woman and a child were killed by an army sniper in the area, according to the Observatory, which relies on a network of activists, doctors and lawyers on the ground.

Rebel have established rear bases in parts of the southern and eastern districts of the capital, prompting the Syrian military to launch raids in a bid to uproot them.

In southern and eastern suburbs of the city, rebels were also battling troops backed by members of Hizbullah, the Observatory said.

Government troops are pushing in particular to retake the village of Zayabiya and Babila, south of the capital, mixed Sunni-Shiite villages near the Sayyida Zeinab shrine, a Shiite pilgrimage site.

At least 93,000 people have died in more than two years of violence in Syria, and the Observatory said at least 133 were killed on Wednesday.

UNESCO, meanwhile, added six ancient sites in Syria to the endangered World Heritage list, warning that the violence had inflicted heavy damage on them.

Fries with ketchup and chili sauce :)

Once the FSA gets the right weapons, the will do the right job of getting Syria rid of the butcher bachar and his scum of Iranians, Hizbes and extremist Iraqis...then they will get rid of ALL OTHER extremists whomever they are...Long live a BRO M14 the new democratic Syria....TIC TAC...TIC TAC....

Well, to be fair, Sayyidah Zaynab Mosque is located in Damascus. HA's reasoning of it needing protection and also securement of its surrounding vicinity makes sense. It IS a renowned religious site, after all.

can't the mighty syrian army do the job instead of a lebanese militia? LOL! or is the syrian army so weak they cannot protect their country on their own? hahaha!

I remember every time this lovely bunch got together when the Israelis bombarded Gaza, the West Bank and Lebanon, to name a few, demanded a no-fly zone and made sure it was respected! Aren't they lovely and huggable? But the stench of Sanni, oh my God, discourages even their towels from hugging them. allahou BOOM akbar

Friends of Syria lol. Does anyone remember when this circus was set up it was called friends of democratic Syria. That name lasted 24 hours when they realised the ridicule where you have Qatar, ksa and democratic in the same sentence. Lol.

The pot is calling the kettle black