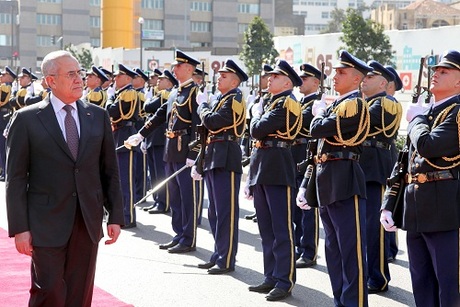 President Michel Suleiman is expected to come under more criticism by the March 8 camp, at the Syrian regime's behest, over his memorandums objecting to the Syrian violations of Lebanese territories, reported the Kuwaiti daily al-Anba on Sunday.

Sources told the daily that the Syrian regime “has been angered” by the president's stances and it has tasked its allies in Lebanon to launch campaigns against him “ahead of obstructing his role as president during the last year of his mandate.”

They explained that Hizbullah cannot afford to lose the president's backing because such a development will mean the loss of the party's legitimacy.

“It is this legitimacy that Damascus used in order justify the presence of the Syrian army in Lebanon” during its period of hegemony over its neighbor, they continued.

Furthermore, they revealed that the Baabda Declaration that was approved in June 2012 is another factor that has incurred Syria's disappointment with Suleiman.

The Declaration was unanimously agreed upon by members of the National Dialogue and it calls for Lebanon to disassociate itself from regional crises, especially the conflict in Syria.

The March 8 campaign against Suleiman is expected to be confronted by one by its rival March 14 camp in support of the president.

The alliance has praised him for his national positions “that demonstrate his keenness to maintain Lebanon's sovereignty.”

Earlier this week, Suleiman submitted memorandums to the United Nations and Arab League over Syria's violations of Lebanese territories.

His step was criticized by March 8 officials, with MP Assem Qanso accusing him of committing high treason.

The president has since requested that caretaker Justice Minister Shakib Qortbawi take measures against the lawmaker.

Shells fired in the conflict between regime forces and Syrian rebels have frequently landed in Lebanese territories in recent months.

They have increased since Hizbullah became involved in the fighting alongside the Syrian regime forces with rebels retaliating to the party's involvement by shelling the Lebanese region of al-Hermel.

Syrian regime troops have carried out attacks on Lebanese border areas, mainly air raids on the northeastern town of Arsal, which has become an escape route for rebels and people running away from the fighting in Syria.

m8 are a bunch of traitors who get their orders from foreign countries.

So where does that leave M14? Not defending M8 or anything, but M14 is the same thing.

But thanks for stating the obvious.

Vert much so. Let us remember that on march 8 a large amount of people marching were not Lebanese.

It's amazing how M8 expects Lebanon to just sit there and take it. Suleiman did what any NORMAL president would do when his country is being constantly violated.

Lebanon must be the only place on the planet were the president is attacked for defending his country. The proud Assad/Iranian lackeys have no shame .

i'm sure HA was targeting our president in order to eliminate him as he's done to all other leaders who are not with them.
"be with us or die".. signed by Hizbol shaitan"
hope that God will protect our president

no. it was not meant to eliminate him. the ballouneh attack, together with the arsal attack and the saida attack was a retaliatory warning from assad the dog against our president. Retaliation because he raised his head and said "please stop attacking lebanon". You see, Assad the dog does not accept any ounce of sovereignty in lebanon, and each time he sees some sovereignty, he sends his snakes killing the source, whether Cheikh bachir or Rafic, or Wissam.

M8, the hypocrites--they really can't find a way to publicly justify the syrian actions, especially since mansour has been relegated.