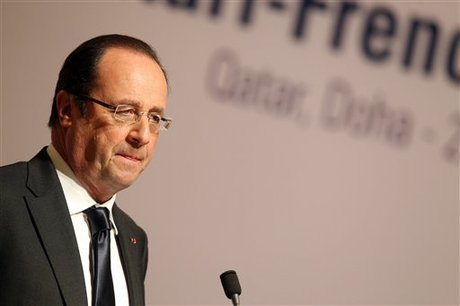 French President Francois Hollande on Sunday urged support for the Syrian opposition but said it should "clarify" its ties with extremists, in talks with Jordan's King Abdullah II.

"We want the opposition to be given the necessary support," Hollande said in Amman during a one-on-one meeting with the king at which journalists were present.

"We share the same point of view. We want to help the Syrian opposition to organize themselves and clarify their relationship with extremist groups."

Hollande flew in for a brief visit from Qatar, where foreign ministers of the "Friends of Syria" group, which includes France, agreed on Saturday to boost assistance to the Syrian opposition.

He urged the mainstream rebel Free Syrian Army to "retake" areas that have fallen into the hands of extremist groups.

The French leader said in Amman he appreciated Jordan's assistance and hosting of around 540,000 Syrian refugees who have fled across the border into the kingdom.

"We must do everything to help. There are 100 million euros in humanitarian aid from France. And we want to expand further to meet the challenges," he said.

Around 150,000 of the Syrian refugees in Jordan are housed in the Zaatari camp in the north near the border.

According to the United Nations, more than 1.6 million Syrians have fled to neighboring countries since March 2011.

The violence in Syria has killed more than 93,000 people.

I, as an honest representative of the "Syria opposition" do clarify "extremist ties" by saying that with or without their massive involvement there is every chance that the "ASSad" regime will fall according to the weekly predictions of the Lebanese and Arab NostraDamsels. It's only a matter of weeks, I swear on GabbyMarch14's honor! After all, the arms that we need shall once again fall into the hands of the "ASSad" regime and "Hizbushaitan" of wilayat al faqih evil doers and forces of satan losers. allahou BOOM akbar. We (i.e. the Sannis, aka the lunatic blood-thirsty cannibals) shall prevail, OBVIOUSLY.