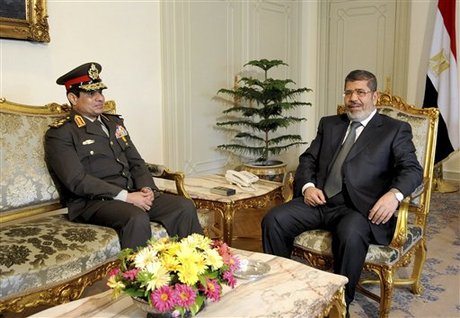 Egypt's defense minister warned on Sunday that the army will intervene if violence breaks out in the country where opponents of President Mohammed Morsi are planning rallies against him this month.

"The armed forces have the obligation to intervene to stop Egypt from plunging into a dark tunnel of conflict and infighting," Abdel Fattah al-Sisi warned ahead of the first anniversary of Morsi's election, as opposition leaders clamoured for his resignation.

Morsi's opponents, who accuse him of hijacking the 2011 uprising that toppled Hosni Mubarak's regime, plan a rally on June 30 to mark the day Morsi was sworn in as Egypt's first civilian and Islamist president.

The defence minister urged Egyptians to set aside their differences, saying that it is the army's duty to act to prevent chaos.

"It is the national and moral duty of the army to intervene... to prevent sectarian strife or the collapse of state institutions," Sisi said during a meeting with soldiers.

He also criticised those who make anti-army statements.

On Friday, a member of Morsi's Muslim Brotherhood movement, Mohamed al-Baltagui, criticised the army at a rally organized by supporters of the president ahead of the opposition's planned protest.

"Those who think that we ignore the dangers facing the Egyptian nation are mistaken. We will not remain silent in the face of the country's plunge into conflict," Sisi said.

Tens of thousands of Morsi supporters massed on Friday in a show of strength ahead of the June 30 protest.

Morsi has repeated a call for dialogue in an attempt to ease deep political divisions.

"I have said it before. I urge everyone to sit together to discuss what would achieve the interests of our nation," he said in an interview published in Saturday's state-owned Akhbar al-Youm newspaper.

There are fears ahead of the anti-Morsi rallies that violence could erupt between his supporters and opponents.

Egypt is deeply polarised. Morsi's supporters say he is clearing institutions of decades of corruption, but his critics accuse him of concentrating power in the hands of the Muslim Brotherhood.

Since taking office a year ago, Morsi has squared off against the judiciary, media, police and most recently artists.

Leading dissident Mohamed ElBaradei, a former chief of U.N. watchdog the International Atomic Energy Agency, urged the president to resign for the sake of national unity.

"For Egypt's sake, I call on President Mohammed Morsi to resign and give us the opportunity to begin a new phase based on the principles of the revolution, which are freedom and social justice," ElBaradei said.

A campaign dubbed Tamarod (rebellion in Arabic) first called the anti-Morsi rally to coincide with the first anniversary of his taking office.

Tamarod rapidly picked up steam, and organizers said they have collected 15 million signatures demanding that Morsi step down.

The president says political differences can still be resolved.

He has said he would consider bringing forward parliamentary elections scheduled for later this year, although no date has yet been set.

"I will continue in my pursuit for contact, and I may speed up parliamentary elections as a way of involving everyone in an agreed method to manage our differences," he said in Saturday's newspaper interview.

Egypt has been rocked by violence over the past year, with political divisions spilling onto the streets in sometimes deadly confrontations.