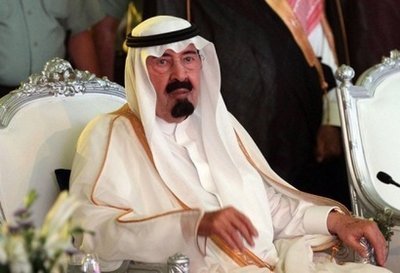 "On behalf of the people of Saudi Arabia I congratulate you for taking over the leadership of Egypt at this critical time in its history," Abdullah said in the first message of congratulations by an Arab leader to Adly Mansour.

"We call on God to help you bear the responsibility to achieve the hopes of our brotherly people in Egypt," the head of the Sunni-ruled oil powerhouse said in the message.

He also paid tribute to the Egyptian armed forces and its leader Abdel Fattah al-Sisi for using "wisdom" in helping to resolve the crisis and avoiding "unforeseen consequences."

Sisi also called for early presidential and parliamentary elections in Egypt, triggering a flood of celebrations across the Arab world's most populous nation.

That didn't take long ... I guess the GCC was tired of the Brotherhood emissaries from Egypt trying to democratize their kingdoms.

Hey Libon, i work and live in Riyadh since 3 years, i can tell you this country is blessed to have King Abdallah. here you have opportunities, good salaries, lowest fuel cost on earth (20L for 2.4$), no electricity cuts, fastest internet at low rates, little or no traffic, peace of mind (no politicians talking daily like our politicians who occupies all TVs), low cost to own a car, low cost to own a villa,.....the list never end.
just tell few reasons why you hate Saudi and why you love Lebanon ???

"i also hate hypocrites who see the benefits of the monarchy but, who call for 'democracy and freedom' to happen in other countries "

LOL! just like hezbis and FPMers hate to see a revolution in syria but ask for it elsewhere and applauded libya's revolution! LOL!
i guess you hate yourself schizophrenic FT!

One of the signs of the our is that al madina will be filled with hypocrites.

Maybe the khilafa should be given a go? I anticipate this coup will strengthen the hand of those who believe that democracy is a no-no, both strategically and tactically speaking. Which may well be true. Khalifa wanted!