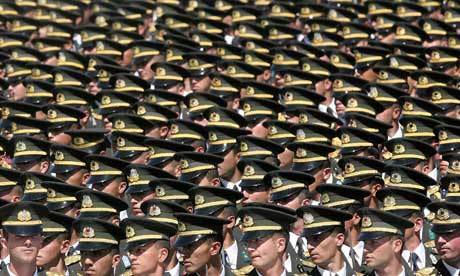 Two-star admiral Mucahit Sislioglu, a colonel, and two other soldiers were questioned Friday and then charged as part of an expanding probe into a purported coup plot, codenamed "Operation Sledgehammer," that has already landed some 200 soldiers in court.

The arrests bring to 25 the number jailed pending trial since the investigation entered a second stage after fresh coup documents were allegedly discovered in February, Anatolia said.

The probe, the toughest challenge yet to the once-omnipotent Turkish army, has resulted in a massive case against 196 serving and retired officers, who went on trial in December. Most of them remain in prison.

The case has been marred by serious doubts over the authenticity of some incriminating documents, fueling mistrust between army and government.

Prosecutors argue the coup plan was drawn up shortly after the Justice and Development Party, the moderate offshoot of a banned Islamist movement, came to power in November 2002 amid fears it would undermine Turkey's secular system.

The soldiers allegedly plotted to bomb mosques, and down a Turkish jet over the Aegean and blame it on Greece, hoping to destabilize the government and garner public support for a coup.

The alleged mastermind says papers from a seminar on a contingency plan based on a scenario of tensions with Greece and domestic unrest have been doctored to look like a coup plan.