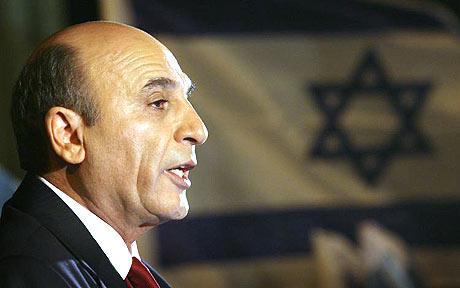 A unilateral Palestinian bid for statehood in September could lead to fresh conflict between Israel and the Palestinians and destabilize the whole region, a senior Israeli politician has warned.

In an interview with Agence France Presse, Shaul Mofaz, who heads the powerful parliamentary Foreign Affairs and Defense Committee, said he would urge French leaders not to support the bid during a visit to Paris on Monday.

"The possibility of a unilateral declaration, it could bring Palestinians out on to the streets for protests and, God forbid, it could lead to a conflict," said Mofaz, a former defense minister who is an MP for the opposition Kadima party.

"Given the great changes in the region, it is very difficult to predict what will happen," Mofaz said. "In this situation, an Israeli-Palestinian conflict could lead to a harsh reality."

Mofaz, 62, who was armed forces chief of staff when the second Palestinian uprising erupted in 2000 and later served as defense minister under Ariel Sharon, is leading a delegation of five parliamentary committee members on a three-day visit to France and Germany.

"In my visit to France, I will tell them very clearly we are against the unilateral process at the U.N., and against support for this unilateral process," said Mofaz, who will be holding meetings with French Foreign Minister Alain Juppe and his counterparts in the National Assembly and Senate.

The Palestinians plan to seek recognition at the United Nations General Assembly in September of a state within the borders that existed before the Six Day War of 1967.

France has indicated that it might recognize an independent Palestinian state if peace talks are not back on track by September.

Germany, like the U.S., is opposed to any unilateral steps and accepts the Israeli position that any progress must be made through negotiations.

Mofaz is currently the number two in the main opposition Kadima party, and has already declared he will challenge Tzipi Livni in the next party primaries after narrowly losing in the last leadership race.

But although Mofaz shares the government's opposition to the September bid, he was critical of Prime Minister Benjamin Netanyahu for not presenting any alternative.

"To my sorrow, the current government in Israel, and I say this as a member of the opposition, does not have any plan it can put on the table and say: 'This is our initiative,'" he told AFP.

It was critical for Israel and the region that the peace process be rejuvenated, particularly at a time of such turmoil in the Middle East, he said.

"In the face of this wave (of uprisings) we have no choice but to bring about a reality where there is the start of a process with the Palestinians -- and this process will stabilize the region."

Over the last two years, Mofaz has been working on his own peace plan which would involve the immediate establishment of a Palestinian state with provisional borders, and parallel talks on final status issues.

He said he would present his proposal, which would initially involve a Palestinian state on around 65 percent of the occupied West Bank, to European leaders.

Talks with the Europeans will also focus on the changes sweeping the Middle East and the West's concern over Iran's nuclear program, which pose significant short-term threats to Israel, he warned -- particularly if radical Islamist groups seize power in its Arab neighbors.

But in the long term, greater democracy in the region would benefit Israel, he said.

"I think that Bashar Assad will be overthrown from the government in Syria," he said. "The processes that are happening there are very momentous, very serious."

It was just a matter of time until the Syrian army started deserting in droves, which would spell the end for Assad, he said.

"On the day that desertions begin, not just one soldier but thousands ... it will start to crumble for him. The moment things start to crumble, Assad won't be there long.

"It will happen because it is not normal for soldiers to shoot their own people."

The London-based Syrian Observatory for Human Rights says that 1,342 civilians have been killed in the government's crackdown and that 342 security force personnel have also died.

Mofaz said he hoped the Sunni majority would take power, ending the domination of Assad's Alawite minority; an outcome he said might bring to an end to Syria's alliance with Shiite Iran and the Hizbullah in Lebanon.

"The Sunnis are more moderate and this is good for Israel as it opens a possibility of future peace talks and preserving the quiet," he said.

Mofaz and his fellow skunks, rapists and thieves can avert more wars and more misery on themselves first and foremost by going back to their roots in Europe. Those from the Middle-East and North Africa can remain if they want to behave. After 60-some years, it's only logical, and honestly, the quickest and safest solution. Afterwards, our love affair can resume. I swear.

Every intelligent Israeli should know that time is not on israel s side. it is on the palestinians.. It is in Israel s interest to recognize a palestine within 1967 boarders. it is in Israel s vital interest to establish the best ties possible with that palestinian state.. any other option, wars included, will result in the demise of israel as a state for the jewish people.. Demography, democracy, justice will eventually prevail... look at S.Africa