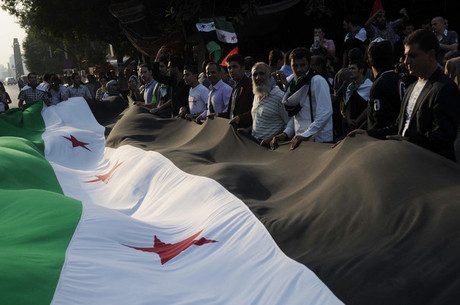 Syrian opposition activists, including National Coalition members, have drawn up a transitional roadmap including a call for national reconciliation and justice for "all of Syria's victims," a statement said Tuesday.

The roadmap is to be presented in full on Wednesday, in the presence of National Coalition chief Ahmad Jarba, but has not been officially endorsed by the key opposition group.

"National reconciliation will be achieved through a long transitional justice process in which justice is assured for all of Syria's victims," said the statement.

It comes amid reports of abuses carried out by both regime forces and rebels in Syria's conflict.

While the country's uprising began with peaceful anti-government demonstrations in March 2011, it has turned into a bloody war that has left more than 100,000 people dead.

Both sides have been accused of summary executions, sectarian killings and torture.

"All armed groups will be disarmed, demobilized and reintegrated into Syrian society," it adds.

It lays out plans for the country's political system after the fall of the Syrian regime, calling for a "hybrid presidential/parliamentary system."

And it proposes using the country's 1950 constitution as the basis for a new charter, with an elected constitutional assembly mandated to decide on modifications.

The 1950 constitution was the first in Syria to be drafted by a constituent assembly, but has subsequently been replaced.

It gave the legislature more power than the executive, and states that the head of state must be a Muslim.

The group behind the proposal, Syrian Expert House, includes some 300 activists, lawyers and members of the National Coalition and Syrian National Council.

More than 200 pages spell out in often minute detail a plan for how best to manage a transition in the event the regime of President Bashar Assad falls.

It argues for war crimes tribunals to be held in Syria with international experts providing advice, and pledges that trials will cover all those accused of abuses.

"The goal is not to target a specific religious group," the document says, adding "there is no place for the policies of revenge or retaliation."

"Even members of the armed opposition must be held accountable, and their trials should be conducted according to international standards to avoid any challenges to these trials' legitimacy," it adds.

The document is unlikely to sit well with the most extreme of Syria's rebels, jihadists with the al-Qaida-affiliated Al-Nusra Front and Islamic State of Iraq and the Levant.

The groups have made clear their goal is for a greater Islamic nation, and that a pluralistic democracy is not on the table.

The roadmap could even incur the anger of more moderate Islamists, including the Muslim Brotherhood organisation, with its proposal that election laws exclude parties "founded on a religious, racial or doctrinal basis."

It is being released as fighting continues in Syria, with fierce battles in eastern Deir Ezzor and coastal Latakia, the latter Assad's home province.

International efforts to organize a conference on a political solution to the conflict have stalled.

"The roadmap could even incur the anger of more moderate Islamists, including the Muslim Brotherhood organisation, with its proposal that election laws exclude parties "founded on a religious, racial or doctrinal basis.""
This is a great way to restructure the governmental form of any country. We've seen time and time again that secular governments have been the most well-equipped in running a country. I think the problem is that those who follow a certain faith fail to realize that a secular government in no way threatens their way of life or disregards their needs. In any case, it should press ahead in the manner they have described.

In any case, I do still believe a political solution will be what will save the country faster than any other mean.

What is alarming though to me seems to be a lack of any mention of Al Qaida and the dozens of other terrorist organizations that have been central in many of their victories. Do they not reference them because they perhaps believe these terrorist organizations will simply pack up and leave? They've never done so (e.g. Iraq, Afghanistan, Chechnya, Libya, etc. ) and it is an extremely important topic, more important than any other I'd say.

You have to put up a vision to rally people around as an alternative to the blood soaked nightmares offered by both the regime and Al Qaeda.

Well then, I remain eager to see their plans regarding the matter when they are released.