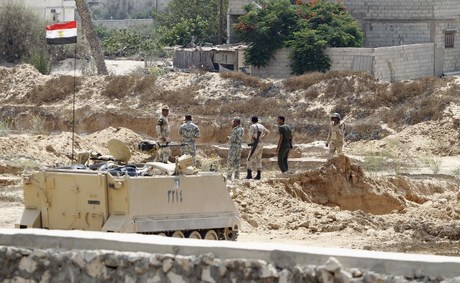 Several hundred Egyptians protested Tuesday in the frontier town of Rafah against the military's demolition of homes across the border from the Palestinian Gaza Strip, witnesses and security officials said.

Troops have bulldozed at least 15 homes in the restive border town which security officials said housed entrances to tunnels used to smuggle goods into Islamist-ruled Gaza.

The military has intensified a campaign to shut down the tunnels since it ousted Islamist president Mohammed Morsi on July 3, unleashing daily militant attacks on police and troops in the Sinai Peninsula.

Residents fear the military is trying to create a buffer zone with the Hamas-ruled enclave.

Witnesses said about 350 protesters turned out on Tuesday in the run-down town, the entry point of contraband to Gaza which is under semi-blockade by both Egypt and Israel.

Dozens of policemen and soldiers have been killed since July 3 in shooting and rocket attacks in north Sinai, including 25 police conscripts executed by militants who ambushed their bus.

On Tuesday, military helicopters killed eight suspected militants and wounded 15 in air strikes on their suspected hiding places in a village near Rafah, the army said.

What Mubarrak and Morsi didn't do in 40 years, Sisi has done in 2 months.
He certainly knows how to deal with terrorism.

terrorists smuggling food and supplies into gaza?
i hope sisi and the whole jewish tribe burn in hell.
your time is coming, you will all be marched back to Egypt and sold.

So now you are not just anti-Israeli, you have become anti-Egyptian.
"terrorists smuggling food and supplies into gaza?" If they weren't terrorists, they wouldn't have to smuggle food and supplies. The Rafah crossing, the Kerem Shalom Crossing and all the other crossings would be open 24/7 to legally import whatever is missing.