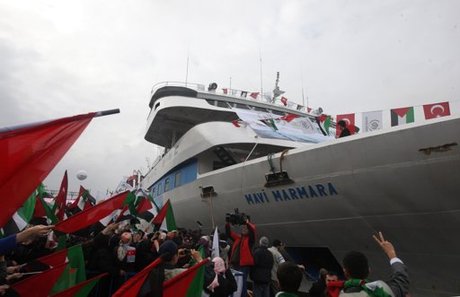 Turkey is preparing to harden its attitude towards Israel for its refusal to apologize over last year's deadly raid on a Gaza-bound aid flotilla, official sources said on Tuesday.

The Israeli government has to date failed to either say sorry or compensate families of the nine activists who were killed in May last year in a commando raid on the Mavi Marmara, a Turkish-owned ferry which was leading the convoy.

Speaking after it emerged a U.N. report into the incident had been delayed yet again, a senior source in Prime Minister Recep Tayyip Erdogan's government said that Turkey was ready to toughen its line towards its former ally.

"The ball is in the Israeli court. If it decides to apologies, then everything's fine. If not, then we will have to resort to Plan B," the Turkish diplomat told Agence France Presse on condition of anonymity.

Among the measures under consideration are moves to bring legal action against the Israeli commandos who took part in the raid or further chill already frosty diplomatic ties.

Turkey, which recalled its ambassador to Tel Aviv after the raid and still only has a charge d'affaires in place, could further downgrade its diplomatic representation and withhold agreement when Israel wants to name a new envoy to Ankara, the source added.

Turkey would strive to have "the Palestinian voice" heard more in international organizations, particularly at the United Nations where Palestinians are pushing for full membership.

The Turkish government would also try to take a more active role in efforts to reconcile the two main Palestinian factions, Hamas and Fatah. Hamas, which rules the Gaza Strip, has been behind dozens of anti-Israeli attacks and refuses to recognize the Jewish state's right to exist.

Erdogan has also recently raised the idea of paying a visit to Gaza -- in a move press reports suggested would take place if Israel continues to refuse to apologize.

Visiting the Hamas-run Gaza Strip would most likely further exacerbate tensions with the Jewish state.

Israel's cabinet is understood to be split over the issue of an apology with Foreign Minister Avigdor Lieberman dead set against, while Defense Minister Ehud Barak and Intelligence Minister Dan Meridor are in favor.

Funny, Armenians have been waiting for a century for a similar apology.

Turkey: take a number and get in line... Israel owns so many people so many appologies that I hope you're not holding your breath waiting for yours to come!

Of course this could be a strategy designed to justify not normalizing relationships with Israel - in which case Turkey is to be applauded... Turkey doesn't need "friends" like these.