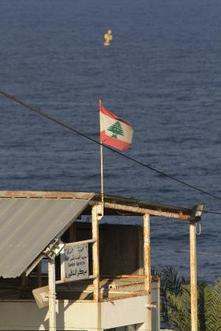 A dispute between Lebanon and Israel over their maritime boundary has heated up and sparked fears of conflict as both countries move to assert sovereignty over an area potentially rich in gas.

Tension rose last month after Israel's cabinet approved a map of the country's proposed maritime borders with Lebanon and submitted it to the United Nations, which has been asked to mediate.

The map conflict with one submitted by Lebanon to the U.N. last year and that gives Israel less territory.

The Lebanese say their map is in line with an armistice accord drawn up in 1949 and not contested by Israel.

They also challenge Israel's assertion that an accord signed in 2007 between Cyprus and Lebanon sets the same boundaries as those agreed between the Jewish state and Cyprus in 2010.

Neither side for now appears willing to budge on the issue, especially given the discovery of important energy reserves near the disputed area which could generate billions of dollars.

An EEZ is a sea zone that gives a state the right to explore its maritime resources.

"Israel cannot arbitrarily flout international law and aggress Lebanon by creating a zone of conflict in our waters," Bassil said. "It's not simply a question of them tracing a line and stating what's theirs."

Hizbullah leader Hassan Nasrallah, whose party fought a devastating war with Israel in 2006, also waded into the dispute last week warning the Jewish state against any attempt to plunder Lebanon's offshore gas and oil reserves.

The United Nations and diplomats are urging both sides to exercise restraint and to resolve the matter at the negotiating table. The disputed zone consists of about 854 square kilometers.

"It is common to the point of routine for neighboring countries to have ... overlapping claims," a senior State Department official said, asking not to be named.

"There are many mechanisms available to both countries to resolve this problem peacefully," he said. "These mechanisms range all the way from direct negotiations to binding arbitration."

He and other diplomats interviewed by AFP said that even though the rhetoric over the border was heating up, it was in no one's interest to start a conflict given the economic interests at stake.

They also pointed out that companies involved in gas exploitation will shun the area should the dispute escalate.

"Companies that do this kind of work avoid working in troubled waters like the plague," said the State Department official. "They are not looking for legal problems or to be in the middle of a dispute."

Another Western diplomat in Beirut said that although legally Lebanon's case appears stronger than that of Israel, it was unlikely the issue would be resolved anytime soon.

Hampering progress is the fact that both countries are technically still at war and as such will not negotiate face to face. Lebanon also has yet to begin underwater energy exploration -- even in territory not contested -- to determine what lies under its seabed.

"Lebanon is lagging way behind Israel on this," the Western diplomat said. "It needs to set up the legal framework to begin exploration and research."

Diplomats said the best way to proceed for Lebanon and Israel at this point is to let mediation run its course while exploring for gas and oil outside the contested area.

"Clearly, there has got to be a process in the future where Lebanon and Israel resolve this (maritime) line," the State Department official said.

"In the meantime, both countries are perfectly free to move forward with hydro-carbon exploitation in areas that are not under dispute."

Few Barrels of oil? I have a question for u ya ithinktherei4im: Would you allow hizballah to take over a few meters of land in Kesrewan just because you do not need a war with them?

There is no need for war (aka Hizbollah) because there are as the article says several mechanisms for solving this dispute in a diplomatic way. There are many simular examples around the world. Norway and Russia (before that Sovjet Union) had a dispute going for 40 years over maritime borders. Not a single bullet was fired, not a barrel of oil was produced. In the end they managed to find a deal both countries could accept. lebanon and Israel can have the peaceful solution that the people wants, but it will leave some egg on the face for leaders that like to demonize the other part to stay alive politcally/militarily.

by the time we start digging on our side, israel would have taken almost all of it. typical Lebanese politicians.

Politics aside, Lebanon can start exploring its oil and gas asap on its side and file the disputed area for arbitration, and during this time neither israel nor lebanon can explore this part. There are international border standards that should apply here, and lebanon should follow. Politicians should not gain points by attacking israel and its policies - we know their agression on land and in sea, and there is nothing new.

We should not give any inch of Lebanon to anyone, any part of Lebanon to anyone, nor Syria, Iran or Israel, this oil , if there is any , is to be shared, legally acccording to 1949 armistice that draw the borders between Lebanon and Israel, but the problem is, our politicians are so corrupted and specially this dummy Gebran Bassil, who like his father in law, doesnt know how to talk diplomatically, and is certainly not the best man to confront Israel's ambitions of gaining more than it should, we need a team of civilised , decent, smart Lebanese experts to go talk about it and protect our interests internationally. But we still have to wait and my idea is that Hezbollah is protecting the oil not for Lebanon but for its state inside the state project, ONCE they get the oil, they will not need anything anymore and will isolate themselves completely from the world, as their goal is Lebanon and israel's goal is chaos in lebanon, 2 ennemies working together for Lebanon's destruction.